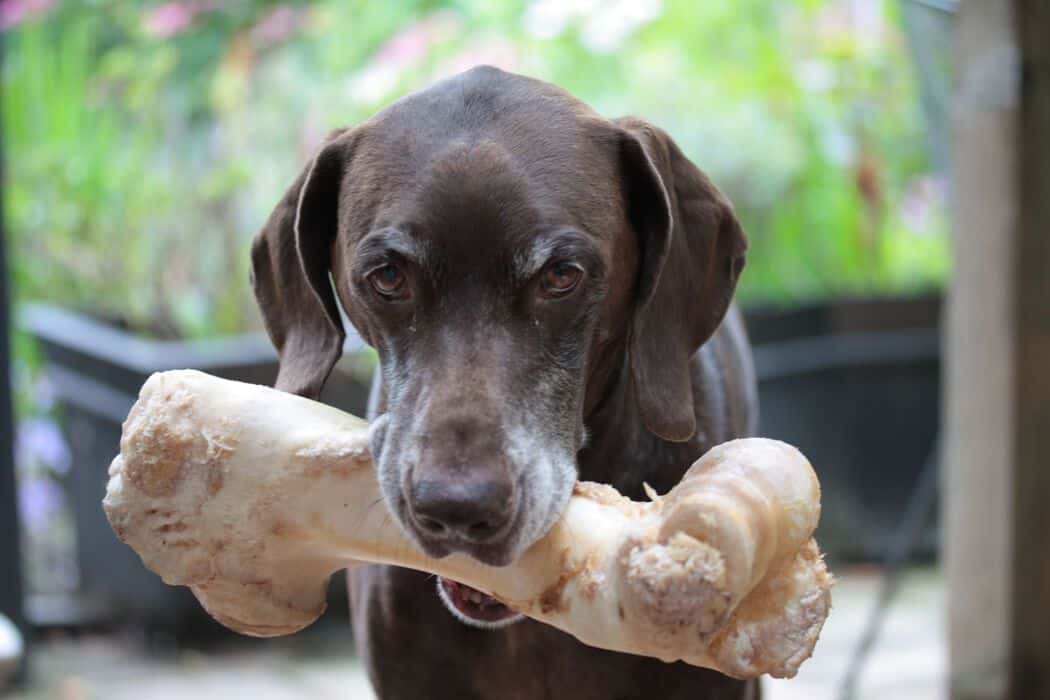 Bones are popular among dogs, but you should ask if bones are safe for your pointer to chew on before tossing one in the backyard.

Pointers can chew on bones, but it’s not always safe or recommended. All cooked bones, pork, rib, and rawhide bones should be entirely avoided because splintering can cause harm to your pointer. Avoid small bones and excess marrow.

It’s a heavily debated topic whether or not to give pointers bones. It’s not recommended, but some owners choose to do it for the benefits they do find. Before making the decision, it’s important to know all the facts and risk factors to keep them safe and healthy no matter the decision and environment.

It is not recommended to give your dog any type of bone because of the significant risks involved. That being said, it’s a popular practice to give dogs bones and has been an understood cliche for centuries.

Veterinarians tend to differ on this issue slightly, but it’s controversial enough to give us pause. It’s best practice to avoid giving your pointer any type of bone because the risks typically outweigh the benefits.

There are definitely bones that should never be given to a dog no matter what you decide to do, and those include:

Some bones are slightly safer options but pose their own risks and dangers. There are other ways to reward your pointer or curb their destructive chewing habits without the aid of a bone.

Of course, there are a few benefits to bone chewing or else there would be no reason for anyone to debate the issue. I discuss benefits as well as dangers in greater detail in the following sections.

As was mentioned above, there are several types of bones that you should avoid altogether.

Pork and rib bones are always stated in succession because they crack, break, and splinter very easily even when raw.

Cooked bones are the same way. Cooking weakens the bone and makes it breakable. Shards and chunks of bone can cause blockages, tears, and punctures in your pointer’s mouth, throat, and intestines.

This can cause serious damage and pain for your pointer which will require immediate emergency attention. This is precisely why these bones are so forbidden from dog consumption.

No bone is deemed officially and wholly safe for dogs. There are some that have been safer options in the past, but all options tend to still carry risks.

There are two broad categories of bones:

The danger of poultry bones, and small bones, in general, is that dogs want to eat them quickly and not chew them. This can, again, cause blockages, tears, and pain.

Recreational bones are significantly larger, stronger, and filled with marrow. They sometimes include:

The larger bones are tough and can make it significantly more difficult for your eager pointer to break off pieces and get them lodged in their throat.

If you decide you want to give your dog a bone, the recreational ones are the safer option.

Note: There is always a risk of choking when giving your pointer a bone no matter what kind or size.

Some benefits that owners find appealing about bones is that they can be a good source of minerals and nutrients. Other benefits of chewing on a recreational bone are the cleaning of their teeth and the stimulation of their gums. Bones can help to reduce the risk of gum disease.

Don’t fret, however, because there are other ways you can keep your dog’s oral hygiene up to par. Consult a veterinarian on all dental needs of your pointer, and they’ll be able to give you the best advice for your individual pointer. They can also help you understand what bones if any, your pointer can chew on.

Pointers are a breed that tends to chew things up when bored and inadequately exercised. Instead of offering bones as a chewing outlet, it is significantly better and more effective to adjust training, playing, and exercise routines to best meet your pointer’s needs.

Common treats can be just as beneficial for a pointer as a reward for training and other activities instead of a bone.

Dangers of Giving Your Pointer Bones

It’s hard to have significant hard and fast rules because dogs are so different even within the same breed.

Some dogs can be over eager and want to bite bones in two and swallow the halves whole. This is very dangerous for the same reasons that have been stated before. Dogs can choke on them or receive serious damage from them when swallowed.

It’s also a slightly bigger risk for pointers because they have a tendency to chew. Chewing on things is a big result of boredom and lack of exercise and mental stimulation.

Overeager pointers are not the only victims of blockages and tears from chewing on/eating bones. Bones in general always have the potential to break off.

Pointers have strong jaws and are determined. If they can get off a piece of whatever they’re chewing on then they’re happy. Chunks of bone, as well as small bones, can be a choking hazard for your pointer.

Bones that are swallowed whole or in big chunks can cause blockages in the intestines, too. Issues that can result from small bones or bone chunks that have been swallowed include:

Overeager and excited dogs, like the Pointer, don’t have the patience to chew a bone until it’s finely ground enough to eat safely. It’s best practice just to avoid them altogether.

Another danger of giving your pointer a bone is the danger of pancreatitis. Marrow commonly found in recreational bones can cause pancreatitis in pointers because it’s so fatty.

The pointer breed is slightly more susceptible to this disease just by nature. Just as it’s important not to feed your pointer too many fatty treats, bone marrow consumption should also be limited for the same reasons.

Best Practices for Bones If You Decided on Them

If you decide you want to give your pointer a bone, here are some tips that can help keep them a bit safer.

As stated before, the most basic tip I can give is to never give pointers any cooked bones, pork bones, or rib bones. You also want to avoid poultry bones if at all possible because the choking risk is significant.

Another good rule of thumb is to never give your pointer bones smaller than their muzzle. You don’t want them getting too excited and trying to swallow the bone whole. It’s a good way to try to avoid that desire in them.

Only give your pointer a bone after they’ve already eaten their meal to decrease the chances that they’ll try to chew and swallow it. Hopefully, an after-dinner bone can be more appealing to chew on rather than consume.

You also don’t want to let your pointer chew on a bone for more than 10 or 15 minutes. The longer they chew on it, the more they break it down. To go along with this, never leave bones out all day for your pointer to chew on at will.

You’re also going to want to supervise them when they’re chewing on their bones to make sure they’re not tearing it apart or having problems.

A few hard and fast rules for giving your dog a bone to chew on, no matter what you chose to do, are summarized below.

It is recommended to avoid giving bones to dogs; however, if you chose to, there are things to definitely avoid and precautions to take to make the activity as safe as possible.

Giving your pointer a bone is up to your own judgment. Consult a veterinarian on the best practices for giving your own personal pointer a bone. They will be able to give you risk factors and recommendations based on their expertise and experience.