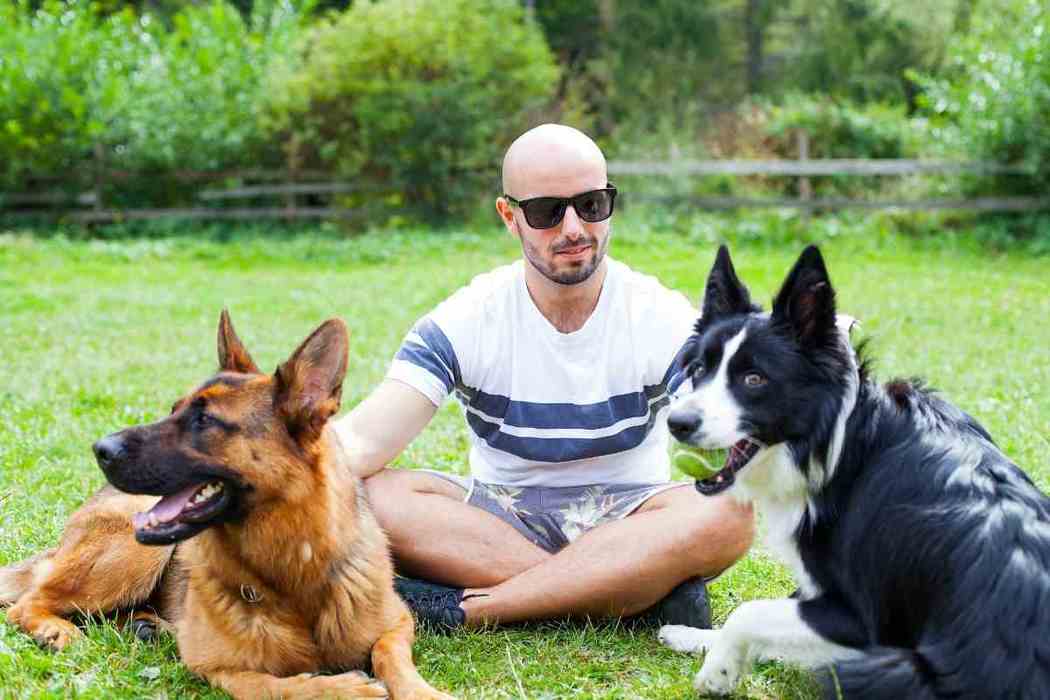 My husband and I took in a German Shepherd from a friend of ours that had to move.  He couldn’t take the dog with him because he was moving into an apartment, and they didn’t allow dogs.  We wanted to adopt a dog anyway, so we figured it was a good time.  We didn’t want to see the dog go to a wrong home or a shelter where something terrible might happen.

She is a huge dog that spends a lot of time in the last week by our side.  We don’t know much about the German Shepherd so I knew I would need to do some research.  She has an odor about her that my husband says is “Doggie Odor,” but I disagree.  We need to learn more about this breed, including what this smell is, and how to fix it fast.

At the end of the day today, I managed to find a moment to investigate this topic.  Here is what I discovered.

Why Do German Shepherds Smell Bad?

Many people believe that all dogs suffer from a natural odor that is just “doggie” smell, but this isn’t always the case for the German Shepherd.  Many factors play a part in how a dog smells just like they do for a human.  It could be that they haven’t been bathed recently or something else entirely.

Some odors are a natural part of a dog’s life since they spend time out of doors in nature and have more hair than we do.  This hair can collect a variety of dirt and debris that can also cause smelliness.

Those potential dog owners that can stand the occasional stink a German Shepherd might have will find this loyal dog breed a perfect fur companion in every way!

The German Shepherd was originally bred as a working dog that loves nothing more than to do a good job right beside their human companion.  They thrive on a close connection with their owner, which can be a bit much if they smell bad.

The German Shepherd spends a great deal of time outdoors doing a job, keeping the squirrels out of the bird feeder, or making sure the neighbor doesn’t creep across the property line they work hard.

Spending time outdoors for the German Shepherd will likely mean that they will encounter various smelly stuff.  The neighborhood raccoons knocked over to the cat poop, the stray cat left in the yard from the garbage.

At times all dogs will do funny things, the German Shepherd included.  We humans may never understand the desire to roll around in a dirt patch, let alone something stinky.  You can be sure, though, that a German Shepherd will do this exact thing at one time or another.

When they do, likely, they will NOT come up smelling like roses when they finally enter the house.

Another reason a German Shepherd might smell bad is that they are wet or going for a dip.  In these moments, it is natural for any dog to smell “doggie” and highly likely that once they dry off, the smell will go away.

If they have dental problems, this can be another reason yet why they might stink.  Infections and dental issues can easily crop up in a dog’s mouth and go unnoticed by many pet owners.  Daily dental care for our pets is as critical as the care we take for our teeth.

Sometimes this can fall by the wayside with a dog that refuses to let anything in their mouth.  In these situations, when a dental problem is the suspected culprit for the stench, it is best to consult their veterinarian.

Skin problems can be an issue for a German Shepherd.  They are less likely the case for this breed than other dog breeds, but they can still have dermatitis and other skin problems.  If these problems are suspected, talking to their veterinarian can help.

No one likes to talk about flatulence, the human or dog kind.  Dogs, however, do suffer just like we do.  This flatulence can go unnoticed until the noticeable smell arrives.

Tummy troubles and flatulence can not only be smelly but uncomfortable for the dog.  Thankfully these issues are easily treatable by a veterinarian or change in the German Shepherds diet.

At times there may be discharge as well as a smell that is like poop.  A visit to the vet is necessary to deal with this issue.

Ear infections can also cause a smell to come from their ear area, making them smell.  Other problems can include issues with their internal organs, such as kidneys or diabetes.  Dog’s age just like we do, and can suffer complex medical problems too.

If, after proper grooming, the smell doesn’t appear to go away, they should see the vet for a thorough examination to rule out internal health problems.

Most dogs will have a bad odor from simple issues not related to their internal physical health.  Most of these mild issues will take no time at all to clear up.

How can I get rid of the smell of my German Shepherd?

The easiest way to get rid of a smell on your German Shepherd is to bathe it.

This bath should be done out of doors or in an easy clean area.  Once the site has been set up, brushing the dog before beginning will help eliminate any debris in their fur.  This grooming will also allow for inspection of the hair and skin. It can help the owner to see if there are any problems in that area.

Bath the German Shepherd with a gentle shampoo, making it fun and loving so they enjoy it.  Rewards are essential, as well as praise.  Once the bath is done, cleaning their ears, clipping nails, and attending to their teeth will ensure good health while allowing the owner to see if there are issues in these areas.

Once that is done, they can be dried with a soft towel and blowdryer if they will allow.  If no areas appear to be amiss and still have a stench, there are other areas to investigate.

Diet plays a role in a dog’s overall health.  Feed them food that is unhealthy, and they will show it in the appearance of their coat of fur and their smell.  Consulting with their veterinarian about the correct diet for each unique German Shepherd will ensure good overall health.

Eliminating foods that naturally cause gas for a dog can minimize the likelihood of smell due to flatulence.  Each dog’s diet is unique, so no two dogs will suffer from precisely the same food.

Generally speaking, beans, spicy foods, high-fat foods, and milk products are often the cause of flatulence and stomach related smelliness in dogs.   While some of these foods like cheese can be a treat for a dog, they can make them smell bad.

Eliminating these foods from their diet can help a dog owner discover if their German Shepherd gets stinky from eating them.  Keeping them on a regular schedule of eating the best foods and limiting the gassy foods ensures a healthy digestive system and stops them from smelling bad.

Watching what they do when they are outside can help keep them from being less stinky.  This watchfulness can be hard to do since this hard-working and outdoor-loving dog breed may spend a lot of time outdoors, but for those dog owners that have the time, it can help them uncover where the stink is coming from.

Once this is discovered, if it is something they can remove or manage like cat poop, they can eliminate the stench, at least until the dog finds something else to roll.

Studying German Shepherd’s behavior can also offer clues of the cause of the stinkiness and how to fix it.  If the German Shepherd appears to be licking one paw a lot or scratching, often these can be indicators that the smell issue is coming from their skin.

We all smell bad sometimes; unfortunately, our dog can’t tell us why they stink.  The German Shepherd will likely suffer in silence or not notice it at all.  Whatever they do, they deserve to be healthy and as good-smelling as possible.

When all else has failed, sometimes pretending the bad smell doesn’t exist is all that we can do for the love of our dog! 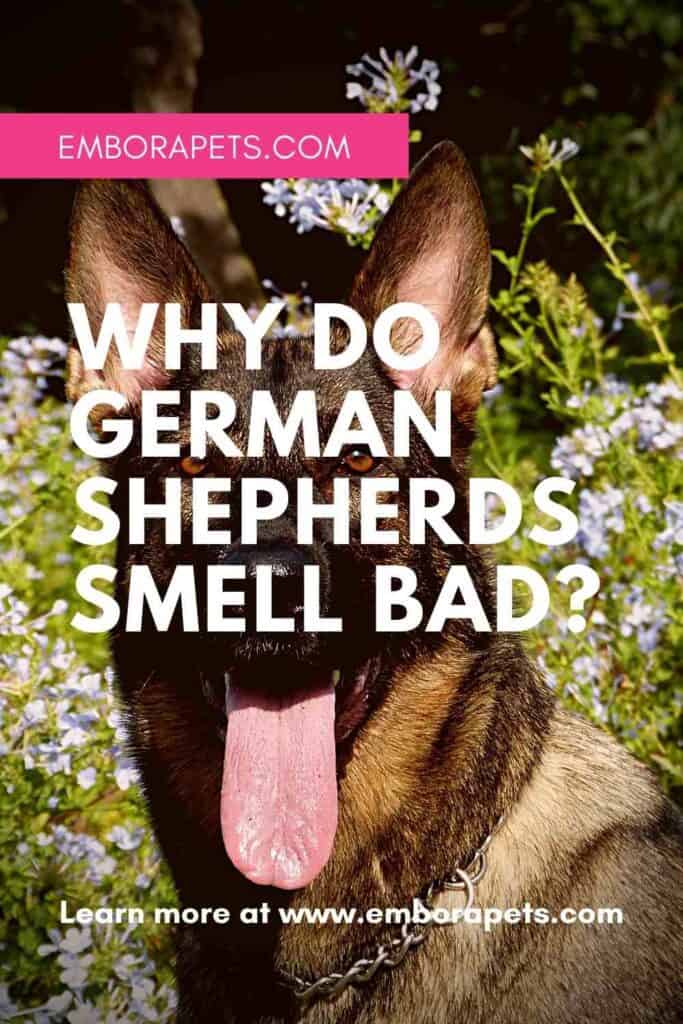