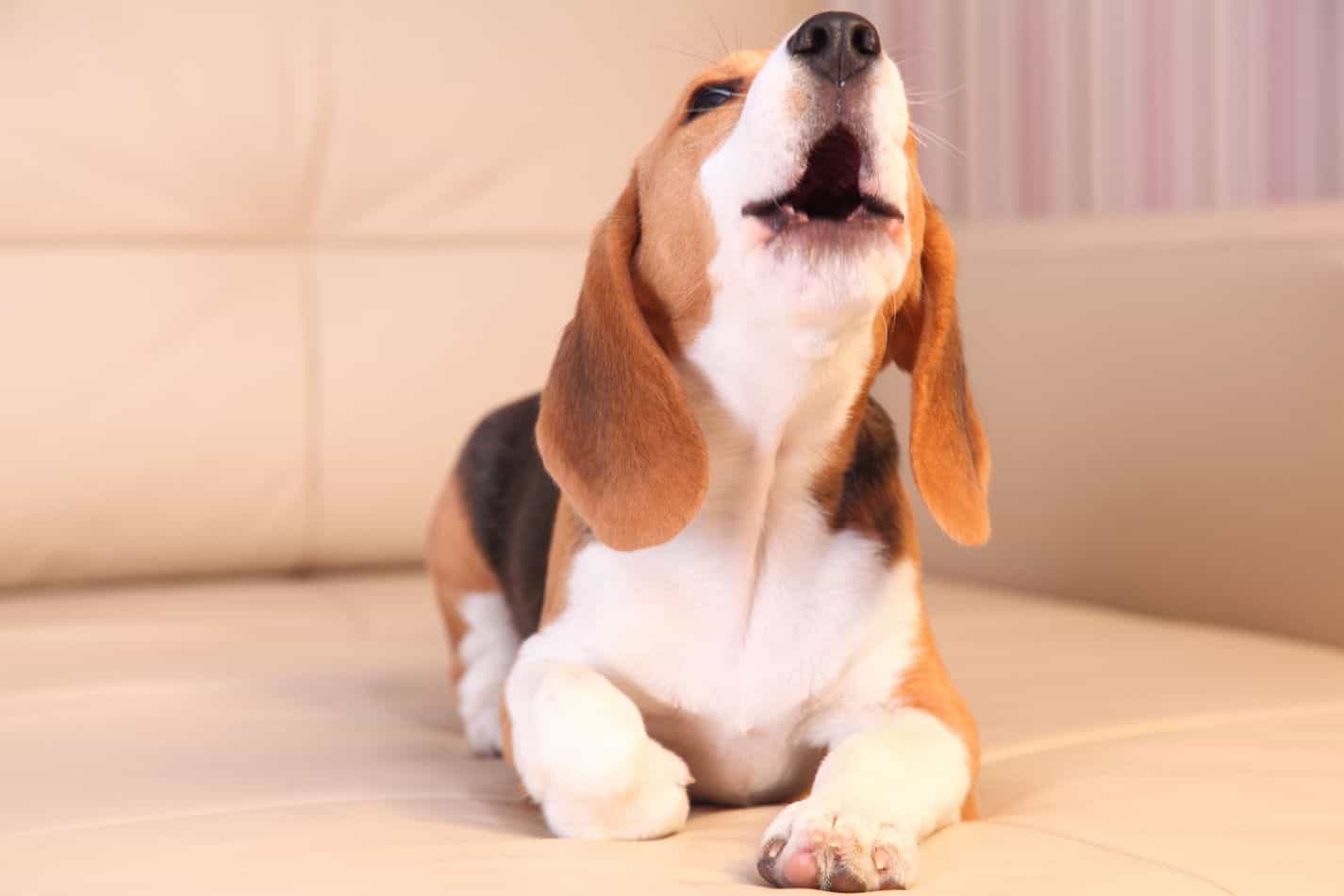 Beagles aren’t known as yapping dogs, but when a beagle has something to say, he isn’t afraid to speak his mind. That being said, I wonder how often beagles feel the need for a good gab session. Do they bark a lot? I did some research and here is what I found.

So, how often do beagles bark?Beagles are not a quiet breed and while beagles aren’t likely to be barking all day, expect frequent vocalization. Beagles communicate through barking. While it may be necessary to stifle some excess barking, remember that beagles also bark when they are hungry or need to be let outside, etc.

Beagles aren’t quiet dogs, but you can train them to stop excess barking. Nothing is worse than an excited beagle stuck in a barking loop for no apparent reason. You can discourage this behavior with proper training techniques.

When Do Beagles Bark? When is it OK and When Should it Stop?

Have you ever met a chatty child? Like a 7-year-old elementary school kid? Do you remember what your conversation was like with them? If I could venture a guess, I would be willing to bet that it was mostly a one-sided conversation with the kid doing most of the talking. Sure, the kid was cute, but she would have been cuter if she didn’t keep asking you why you were so fat.

Beagles are a lot the same way. They can be calm, even downright lazy, at times but when they have something to say, they have no qualms about opening their mouths and saying it!

Why do beagles bark? And is it a bad thing when they do? Do all barks mean the same thing and how can you tell?

These are a lot of questions that owners ask and with good reason. After all, you don’t want to shut your dog up if he has something important to say but you also don’t want him to bark at the garbage truck for hours every time it drives by.

Let’s take a look at why beagles bark, what they may be trying to tell you, and what you can do (if you need to) to stop it.

What the Heck Are You Yelling For? Why Do Beagles Bark?

Why do humans talk? Some people open their mouths only when they have something to say. Theses Laconic heroes only sound-off when they have a need to communicate or something profound to add to the conversation. Silent and strong stoics who would rather observe and wait than blab and irritate.

Other people enjoy the sound of their own voice. They will gab about anything just to avoid the silence. They’ll talk about how cold they are in July just to fill the silence with something.

Beagles are a lot the same way. Every beagle is different, just like every human is different, and they will bark to communicate different needs.

Sometimes beagles let loose a torrent of barks just for the sake of hearing their own voices. We will talk more about this barking behavior later.

For now, I want to focus on barking that really matters. That is, barking to communicate a need.

The Important Barks: How to Recognize Them and What to Do About Them

A beagles sole means of communication are a series of barks, howls, yelps and grunts. You would love to buy a beagle to English dictionary, but you just can’t seem to find one cheap on Amazon. So you are stuck scratching your head and saying, “what is it boy?” over and over and over again to try and figure out what your beagle wants.

Luckily, beagle communication isn’t as complicated as it may first seem. Let’s take a look at the most common reasons for why your beagle may be barking and what you can do about it.

The hunger bark. If you think you have a great internal clock, then you aren’t very familiar with beagles. Beagles have an excellent sense of timing especially when it comes to meals. If your beagle is barking excessively, maybe you have missed a meal.

The remedy. Fixing this problem is simple enough. Just give your beagle some food. A lot of owners have found it helpful to set alarms reminding them when it is time to feed their pets. Consistent meal times do a lot to fix barking.

The stranger danger bark. Beagles are friendly animals, but they can get territorial at time and although not known as guard dogs, they can be unfriendly to strangers. Beagles, like most breeds, bark at approaching strangers to alert their owner to potential threats.

While their protective nature and concern are appreciated, it can be obnoxious if they are yapping at friends and neighbors who frequently visit.

The remedy. This problem might be harder to fix than just popping a plate of food in front of your dog, but it can be done. Here are a few suggestions that other beagles have found helpful in the past.

The “Play with me!” bark. It seems like a beagle could easily beat the Energizer Bunny in a “who could go on-and-on-and-on longer” contest. Beagles have so much energy, it’s hard for owners to know what to do with it all!

Well, turns out that the only way beagles know how to spend pent up energy is by barking excessively. Beagles that are eager to get out and play with their owners won’t be shy in letting the whole world know. Luckily their is a pretty simple cure for this kind of barking

The remedy. Play with your beagle! There are a lot of fun things that you can do to cheer up your dog and help him get rid of some energy. Here are just a few suggestions.

The “I gotta go” bark. This is the bark that I’m sure owners are absolutely thrilled to here. When a beagle needs to go outside to take care of some business, the will bark and whine to let their owners know.

The remedy. Not a lot of thinking needs to be done here. Open the door and let them go. You will better be able to predict your dog’s bathroom schedule if you feed it consistently. Keep track of when you feed your dog every day to get a better idea of when they need to go.

These are some of the most common reasons why your dog may bark, but there could be others. Be observant. See when your dog barks and look for the reason why. You may be able to figure it out and solve the problem.

Of course, there are times when there seems to be no discernible reason for why your beagle barks. What can you do then?

Sometimes your beagle barks and know matter how hard you try, you just can’t understand it. Why you may not understand it, there are a few things you can do to get it to stop.

Why do beagles howl? Beagles are hunting dogs and howl to signify that prey has been sighted or caught. More than likely though, your beagle is not doing much hunting. More than likely he is howling just because howling makes beagles happy.

Zach grew up having small pets in his home. Most of which lived in an aquarium or terrarium. In recent years, Zach has found a new love of dogs after spending many hours volunteering with his local animal shelter. Zach has been a writer for Embora Pets since early 2019 and has become a valuable addition to our team.