If you’re planning on getting a German Shepherd, or you just got a sweet GS mix, you might be wondering one important thing. Just how big is this dog going to get? Let me tell you exactly how big that sweet puppy will get.

Along with these statistics on the size of German Shepherds, we will be looking at the different statistics for the most popular German S breed mixes!

So like was stated earlier, they are in the 20’s in height and 50-90 pounds weight range. This puts them in the “large” dog category. This makes them great herding/work dogs because not only are they large. But, they are smart, fast, strong and capable of doing amazing things.

Benefits of Their Size

They are very muscular, agile and great working dogs. Although they don’t need to be used for herding sheep so often anymore, they are still one of the most useful and versatile dog breeds in the world right now. They are being enlisted for use in the police, military and rescue missions.

Their size and shape isn’t the only things that is so great for these harsh working conditions. They are also very easy to train and eager to please their handlers. Their breed has also been kept pretty pure over the years because of their continued use in the working enviroment.

At What Age is a German Shepherd Fully Grown?

With certain breed lines, they will grow slower. In Eastern Europe, there are some lines of German Shepherds that don’t become fully grown until about 36 months, or 3 years, old. They will then stand at about 20-25 inches tall.

Drawbacks of Their Size

If you aren’t looking for a large dog made to work, this dog may not be the one for you. For example, if you live in an apartment and a big dog just isn’t logical, then a shepherd might not be the best fit for you.

But, you love their look and personality and you feel the German Shepherd is your perfect soulmate then there’s good news! There are GS breed mixes that come in different sizes and still have the charm of full sized shepherds.

German Shepherd Mixes and Their Sizes

There are many different breed mixes with German Shepherd in them. This is to the great personalities and physiques of these dogs. They are strong, agile loyal and friendly. These are things that make really great breed mixes.

In this case, a shepherd mix might be better for you, as they come in all shapes and sizes.

First off, let’s talk about a Shug. That’s a cute little name for the breed mix between a pug and a German Shepherd. This option is a lot smaller than the shepherd because of its pug breeding. They only get about 8-12 inches tall and weigh about 14 pounds on average.

This can be great for those living in an apartment, or someone who doesn’t have a large backyard. This smaller version of the German shepherd might be the perfect match.

Another great option for a smaller version of the German Shepherd is a Corman Shepherd. This breed is a mix between a GS and a corgi. They are bigger than the shug, but much smaller than the shepherd.

They usually get to be about 12-15 inches tall and weigh 25-65 pounds. This varies so much because it all depends on which parent breed the dog takes after.

The weight varies more than the height because corgis are so short and long. Shepherds are the same in the way that they are longer than they are tall. So while they only may get to be 15 inches tall, they can still weigh as much as a German Shepherd. It all depends on how long they are, how tall they get and how dense they are.

Fully grown, they will weigh anywhere from 45-90 pounds (depending on their gender).

Again, this is because golden retrievers are about the same size as the standard German Shepherd, the husky and other dog breeds of that same variant.

Usually, a golden shepherd will weigh anywhere from 22-26 inches and weigh 50-75 pounds.

The Shollie is the breed mix between a German shepherd and a border collie. The difference between male and female here is a little more spread out. Males will reach anywhere from 27-29 inches tall while females will only get to 21-25 inches tall. As for weight they can get anywhere from 70-80 pounds.

Again, a lot like the other mixes and the standard shepherd in size. When decideing between these breeds one would need to look at their personalities, which all offer something differet.

The rottweiler shepherd mix is one of the biggest ones of all the shepherd mixes. This makes sense because both parent breeds are quite large. These dogs will grow anywhere from 21-29 inches in height. This is the same as the shollie, but here is the kicker. They will weigh anywhere from 90-115 pounds!

They are very dense and strong dogs. Children will need to be watched around this breed mix. And, the dog will need stellar socialization so it knows how to handle and control its big body around small children or small dogs.

But, if you’re looking for a big monster of a dog, this is the dog for you. With this size comes a great responsibility. They are known to be one of the greatest guard dog breeds out there, because both parent breeds are so protective and capable of protecting. 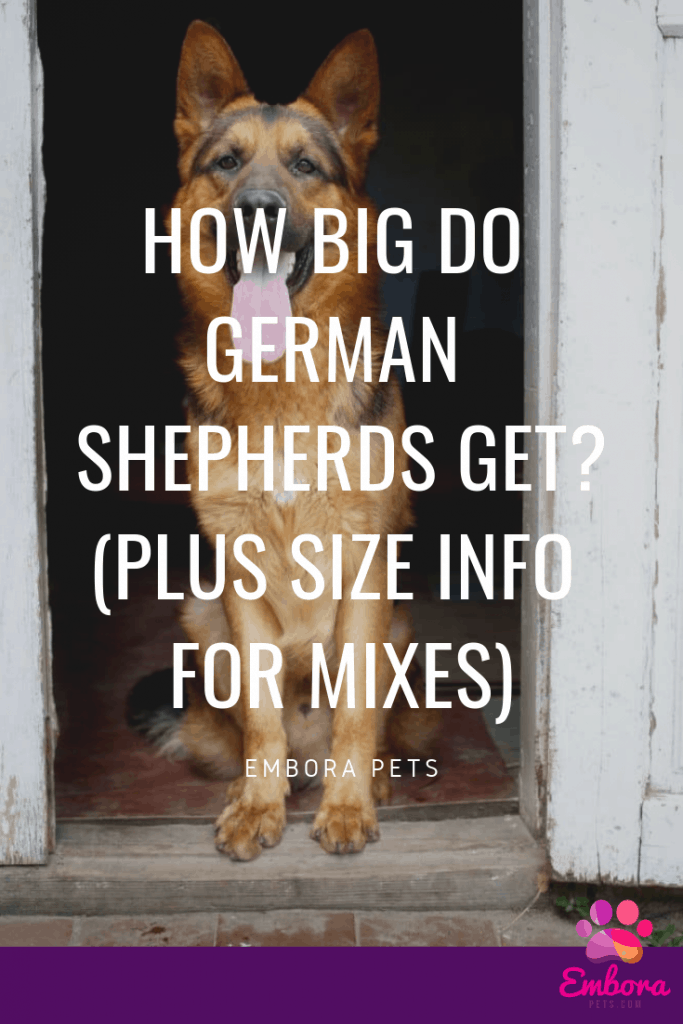 Are German Shepherds good family dogs? German Shepherds are ideal family dogs. They are very calm and caring dogs naturally, so this makes them ideal for families of all shapes and sizes, but especially those with young kids or elderly people. They also make great guard dogs.