Huskies are beautiful dogs bred to run in the icy tundras of the north. They have beautiful furs, beautiful blue eyes, and a lot of energy. Dog lovers everywhere love them. But what about cat lovers? If you have a cat and want a Husky, will they get along? I looked into this question and I’m glad to report that I’ve got some answers for dog and cat fans.

So do Huskies get along with cats? Huskies have strong survival and predator instincts that make it difficult for them to get along with small animals, including cats. While a Husky raised around other small dogs does fine, Huskies generally need training and careful monitoring if they are going to live with a feline friend.

If this has made you question your desire to get a beautiful Husky friend for your little kitten, don’t worry. There are a lot of ways to get cats and Huskies used to each other. If you want to learn more, read on and find out why Huskies and small animals can get used to each other.

Huskies are pack animals and often have a very intelligent, stubborn personality. They also tend to be more predator-minded when they cross paths with cute little animals like cats, hamsters, squirrels, bunnies, etc. They’re great with most other dog breeds, but cats?

Not naturally, at least. It requires training and getting these two very different animals used to each other to make a dent in the Husky’s “I’m-bigger-and-badder” mentality.

Here are 7 tips to get Huskies used to living with cats:

Huskies and Other Small Animals

For the most part, you can count on Huskies needing time to adapt to any little pets. Some animals that it will definitely chase and try to eat/play with include cats, bunnies, hamsters, mice, guinea pigs, chinchillas, birds (if they’re out of their cage), and ferrets. Huskies generally aren’t fans of reptiles of any sort but don’t usually chase after them.

Most of these animals can become tolerable for Huskies as long as they’re allowed to slowly interact with them. If you have a cute little bunny and want a Husky with a beautiful coat to take sweet Instagram pictures of them together (because who wouldn’t do that if they owned both?), chances are it’ll take a while for the Husky to be trained into liking the bunny. That’s just how these dogs work, and we should respect that.

Can Huskies and Cats Ever Actually Be Friends?

While you shouldn’t expect this outcome off the bat, Huskies and cats do occasionally bond well. This probably takes a certain personality trait in both the dog and the feline which is more tolerant than others of their breed, but it is definitely possible.

For example, one user of flickr.com’s “Siberian Husky” group added this to the discussion on cats and Huskies:

Several other users agreed that Huskies and cats can learn to be BFFs.

In another example, ABC News found that a group (or pack) of pet Huskies actually rescued a cat and ended up adopting it into their pack, treating it as one of their own.

These adorable cases melt our hearts, but it’s not always common. However, with careful guidance and a lot of monitoring, you can train your Husky to like (or at least tolerate) your pet cat. 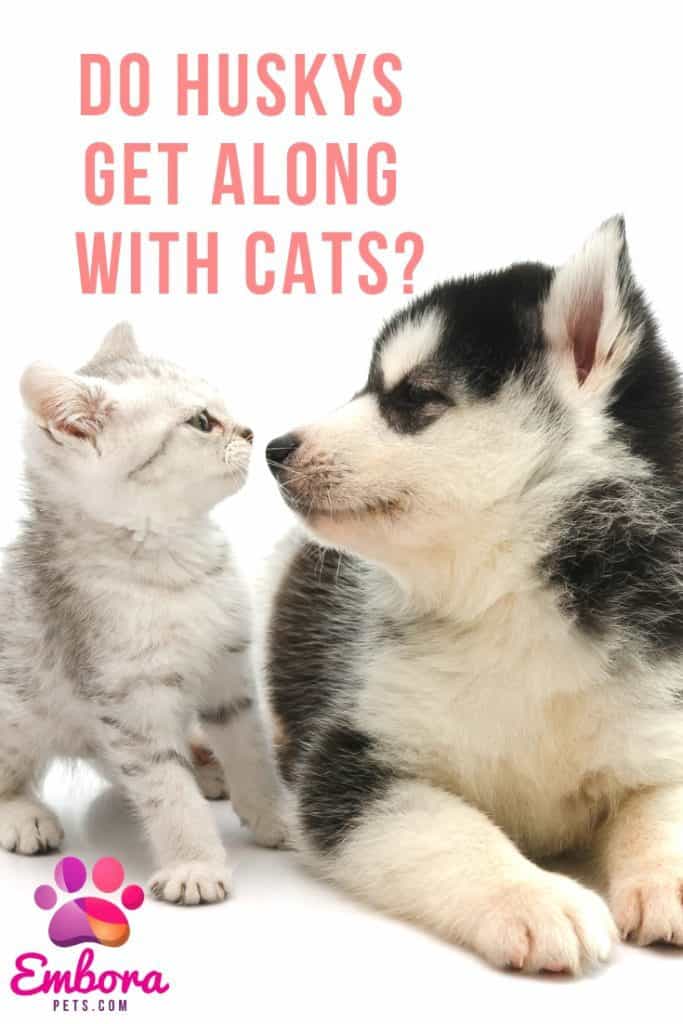 Are Huskies ever allergic to cats? In very rare cases, pet-to-pet allergies can exist, but this is something that has to be diagnosed by a vet. Symptoms of Husky allergies include sneezing, itching, swelling in certain parts of the face, hives, and even vomiting. If you think your Husky is allergic to your cat, or the other way around, talk to a veterinarian to get it diagnosed and keep both pets very clean and separate in the meantime.

Do Huskies and small breeds of dog get along? Generally speaking, Huskies will get along just fine with other dogs, besides being very excitable and possibly playing rough. If you are wanting to get a small dog or small puppy and introduce it to an adult Husky, you will need to supervise a lot and take precautions about their eating bowls, sleeping spaces, and bathroom areas, kind of like cats.