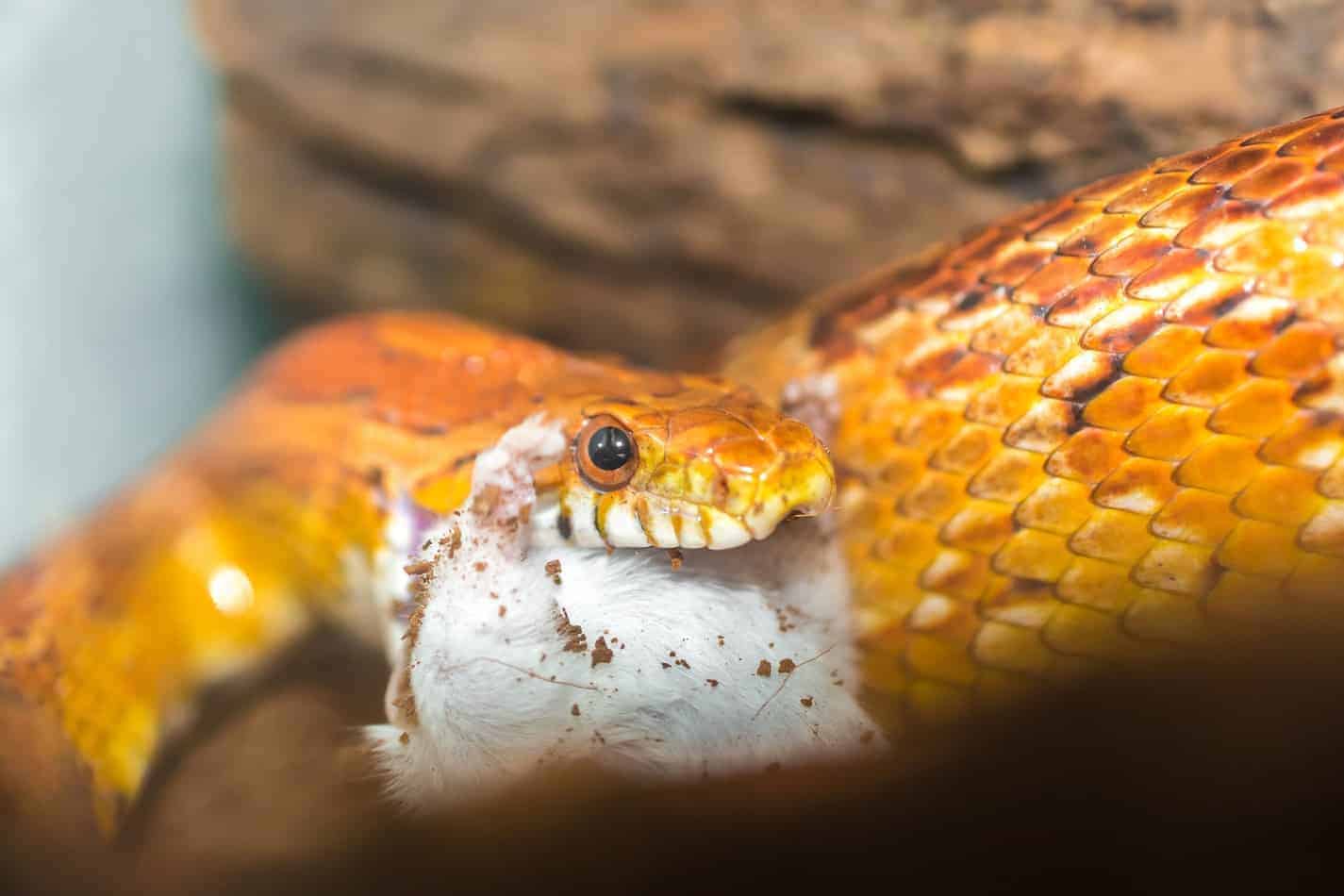 A friend of mine recently obtained a corn snake, and we spent the next few days wondering what corn snakes eat. I did some research, and here’s what I found.

What Do Corn Snakes Eat?

What do corn snakes eat? Corn snakes, both in the wild and in captivity, eat primarily mice. The smaller the snake, the smaller the mouse you should feed it. They can also occasionally eat quail eggs.

Many new snake owners have no idea what it takes to care for a snake. And while the corn snake is extremely popular species-wise for a pet, that doesn’t make it any easier to care for them.

There are very specific things you must do when feeding your snake to optimize the snake’s digestion and health.

How to Feed Your Pet Snake

Snakes are carnivorous animals, no matter where their home is. They have instincts and reactions, just like any other creature. As such, it is incredibly important to feed your snake in the correct manner.

If the mouse has been frozen, let it warm to room temperature so that the snake can feel like it is catching live prey. However, do not give your snake a mouse that was caught in the wild. Doing so will subject your snake to many diseases and parasites.

Cuts in the mouse’s skin will help your snake digest it better. If your snake is stressed and is still getting comfortable in its new home, feel free to offer it a live baby mouse. Lock the mouse and the snake in a well-aerated box to encourage the snake to focus on the food.

The corn snake is a constrictor snake. This means that the snake will catch the mouse, usually by smelling it and slowly squeeze it to death before eating it. I highly recommend vacating the room if you have a particular fondness for mice.

In the wild, baby corn snakes dine on the occasional lizard or frog, because they spend a majority of their time exploring the ground. The adults are able to climb trees and might come across an unguarded birds nest. It is appropriate to feed your snake quail eggs as a treat. However, do not feed them eggs often.

Eggs are not a regular part of their diet. Only give your snake eggs once every few weeks. Eggs for snakes are almost like candy to humans. There is nothing that humans need in candy, and an excess of it is unhealthy.

How the Habitat of a Snake Affects Its Diet

Where snakes live is just as important as what they eat. Just like humans, our surroundings and what we do is related directly to our diet. Snakes do a tremendous amount of work to achieve their meals. Their work is down to their habitat and the food they have available around them.

Corn snakes in the wild live in places like overgrown fields and forests. They will also take up residence in a cozy abandoned building or farm. They are quiet animals and prefer a quiet habitat. In colder weather, snakes hibernate. However, if the weather is just chilly, snakes will come out on warmer days to feel the heat of the sun.

Corn snakes are found primarily in the southwestern United States, from as far as Utah to New Jersey and Florida.

Snakes that live as pets require a habitat that is carefully set up and cared for. Forcing your snake to live in inappropriate conditions may harm it, and make it sick and unhealthy.

It is important, therefore, to make sure the cage is heated, not too humid, has clean water that is replaced every two to three days, cleaned regularly, and placed near a window so it can be well lit. Corn snakes are as susceptible as any other animal to diseases and parasites, and so should be well looked after. Here, you can find an article we wrote talking about the recommended terrarium size for corn snakes, including how to take care of terrarium.

How Handling and Temperament May Affect a Snake’s Appetite

A snake is a living, breathing thing, with a brain and therefore, a personality. Corn Snakes are known to be calm and content creatures and have no venom. They can train to be handled for long periods of time.

However, hatchling corn snakes are known to be nervous and automatically defensive. But no matter how skittish or afraid the corn snake may be, it will not hurt you.

To help the baby snake become more comfortable in its new environment, let it have some time to settle in and get used to a feeding pattern. After a few weeks, feel free to handle the snake for brief periods of time. Approach it from the side, and pick it up gently, but confidently.

Over time, the snake will become more comfortable and can be held for longer and longer. Be careful not to pick it up two to three days after feeding, however,  because it is still digesting its meal. Read this article that we wrote to learn more about the temperament of corn snakes, and whether or not they’re good with kids.

There are many different colors of Corn Snakes. The variations are most often caused by domestic breeding and are not found in the wild. The price of a corn snake is often directly related to its color and the rarity thereof. Most Corn Snakes have little splotches of color on their backs, often called “saddles,” surrounded by a background color. The following list of colors is not, by any means, all-inclusive:

Are Corn Snakes poisonous? Luckily for their owners, no. Corn Snakes are not poisonous or harmful to humans in any way. In fact, a particularly excited kitten can deal more damage than a corn snake ever could.

Do Corn Snakes shed? Corn Snakes shed and grow new skin as they grow longer. It is helpful to the snake if there is a shallow bowl of water they can lay themselves in while they shed. It is also helpful to the snake if there is a damp paper towel or a clump of moss in the corner of the cage to make the air more humid. When the snake is done shedding, take out the moss and paper towel so no mold will grow, and clean up the skin. 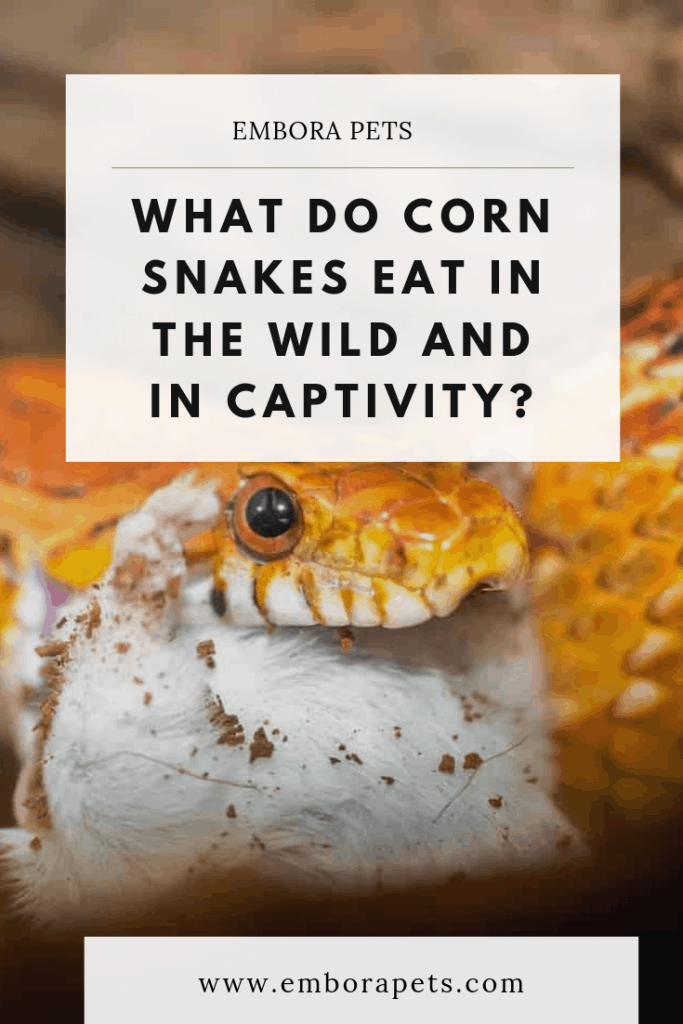 How did the Corn Snake get its name? The corn snake got its name because it was regularly found near grain stores, where it would feed on the mice and rodents that ate the grain. This definition has been used since 1675. Some sources also say that it got its name because the distinctive checker marks on its belly resemble corn kernels.

link to Why Are Jack Russells So Hyper?

Like the other newbie pet owners, you might be wondering about Jack Russell's hyper behavior. Are you worried about why your buddy is too hyper? Is that any issue with them? Is it dangerous? Well,...

Continue Reading
link to Is it Normal for Jack Russells to Sleep a Lot?

Are you worried about your Jack Russells’ sleep pattern? You might notice your champ sleeping 12 to 14 hours a day, wondering if it is normal for Jack Russells to sleep this way. Well, this is,...