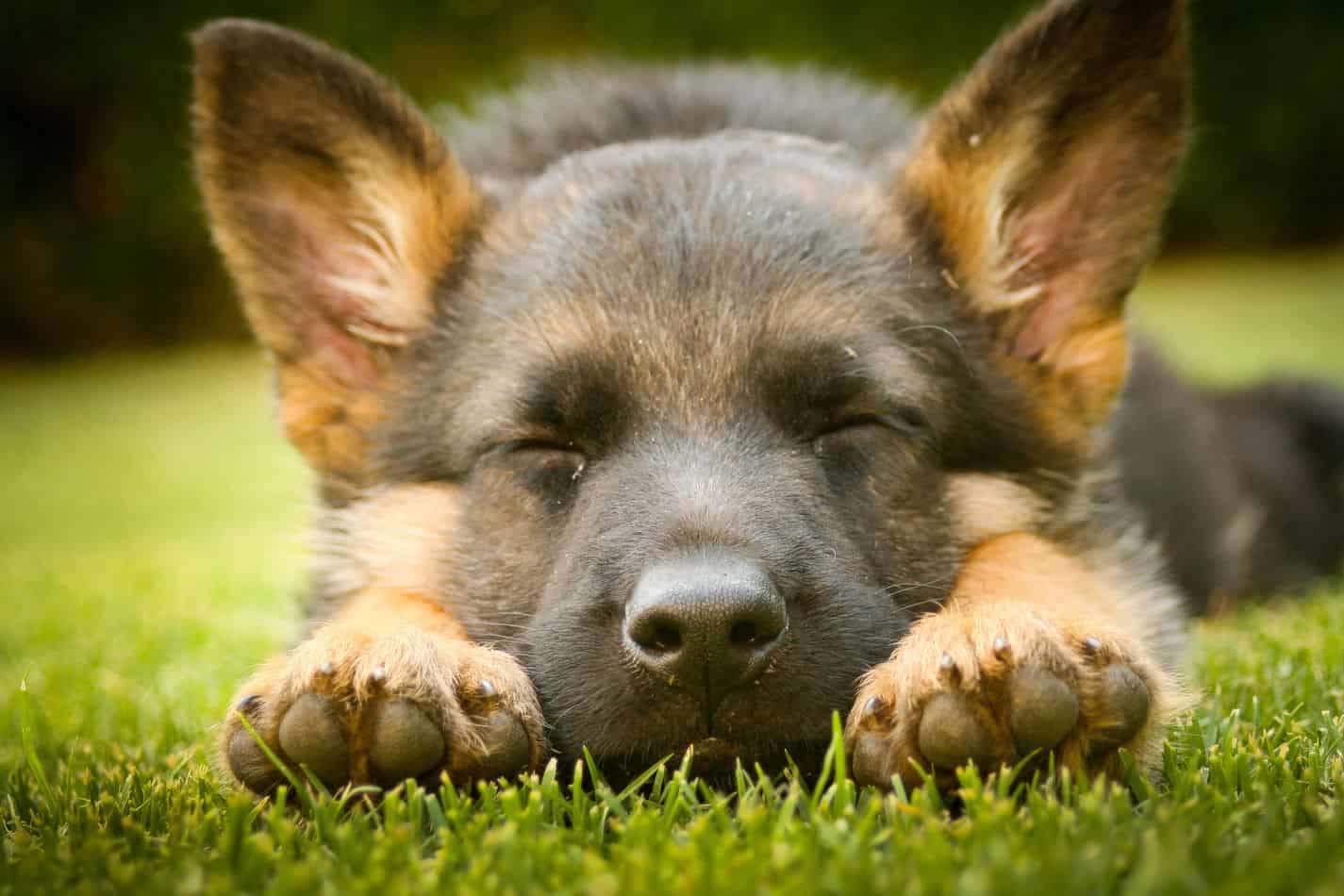 Are you worried that your German Shepherd isn’t getting enough sleep? Sleep is important. This is something we can pretty much all agree on, and when someone doesn’t get enough sleep, it shows. Or perhaps you’re worried about your pal sleeping too much? Let me give you a bit of info about German Shepherds sleeping patterns to help you out.

How much sleep should a German Shepherd have? On average, German Shepherds should get 12-14 hours of sleep. However, different lifestyles may change sleeping habits. Working and or active German Shepherds tend to sleep less, while puppies, as well as older dogs, sleep more often.

Perhaps your dog falls right into this margin, however, if Fido just doesn’t fit the script, that might be alright. Let’s talk more about lifestyle choices that work best for German Shepherds getting enough sleep at night, as well as how to solve some potential issues you might be facing with your buddy’s nap time.

Different Lifestyles and Their Effects on Nap-time

All dogs are different. Some are wild and rambunctious creatures who live for the thrills life has to offer. Others are more docile and are content with the quiet moments of life. Where do German Shepherds lie on this spectrum?

One title to describe a German Shepherd would be the protector. Being specifically bred to watch over herds of sheep, it’s in their very blood to be fiercely loyal. Intelligent and self-assured, they are confident in their abilities and obedient to their masters. These attributes make them amazing work dogs, and as such, hold many roles in society.

German Shepherds are working dogs, and when given a job to do, they can work tirelessly.

Some German Shepherds are brought into military service, fulfilling roles such as bomb detection, apprehension, acting as a scout, and believe it or not, they make a good deterrent for any potential ambushers. German Shepherds that are in the military are the cream of the crop and are carefully selected for their abilities.

Sometimes, German Shepherds will need to stand watch on operations. Much like people, dogs can be resilient in their resistance to sleep.

German Shepherds are also used as Search and Rescue dogs, due to their keen sense of smell. The concentration and energy required of German Shepherds for this task are immense, and sometimes they will be worked near non-stop for days on end after a catastrophe, leaving little time for sleep.

With active lifestyles like this, these German Shepherds tend to . They just don’t have the time to. They are just too busy with training. Through conditioning, these dogs learn and adapt to their wacky sleep schedules until they can be on-call and able to work at the drop of a hat, all day, no matter how much sleep they’ve had prior.

More sedentary lifestyles tend to allow more opportunity to sleep. German Shepherds that stay at home all day are likely to sleep upwards of 14 hours, which is the high end of the average spectrum of sleep typical for German Shepherds.

German Shepherds don’t usually have patterns of sleeping and being awake unless encouraged by their masters. They usually just take naps throughout the day. This time that would normally be spent sleeping is eaten up by training and working by service German Shepherds.

Another thing to consider: age.

A dog’s age directly impacts how much time it spends sleeping. Puppies and younger dogs can spend up to 20 hours a day sleeping. It takes a lot of energy learning about the world.

As dogs get older, they tend to sleep more. This change can seem drastic if your German Shepherd was active and lively, but it is a natural part of aging for dogs to sleep more towards the end of their lives.

Is Your German Shepherd Sleeping Too Much?

So your dog is sleeping too much. Even though the normal range is 12-14 hours a day, 15 hours is still close enough to be considered normal. Sleeping 16 hours a day or more is cause for concern.

There are several potential reasons that your German Shepherd might be sleeping more than usual.

One reason is that your German Shepherd could be sleeping more is that it is sick. Even dogs get colds, and extra rest can help battle the sickness.

Another reason your German Shepherd could be sleeping more than usual is that it is getting older. Age really does have an important role in determining how much a dog sleeps.

Something you can do to help your dog sleep less is to set a consistent time to wake up and go to sleep. Regulate your dogs sleeping schedule, and keep them active and engaged in fun activities to reduce the potential for an impromptu siesta.

These fun activities might include playing with fun toys, playing scavenging games, or if your German Shepherd is good with strangers, it could even be a volunteer part-time therapy dog. These activities can keep a dog awake, alert, and attentive.

If you find that you are having trouble rousing your dog when you need it to wake up, even after having slept more than is normal, it might be time to consult a professional about the behavior.

Is Your Dog is Sleeping Too Little?

Perhaps your dog is sleeping too little. This can be concerning. Like we said at the beginning of this post, sleep is important.

Go on a nature walk, play in the backyard, do something active outside. Sometimes this can interfere with our own busy schedules, but the most likely cause that your dog is staying up is that it’s got energy out its ears. Find a way for it to exercise. It’s just as important for your dog’s health as getting enough sleep.

Perhaps your dog is getting the necessary exercise and is still bouncing off the walls. In cases like this, after consulting with a veterinarian, melatonin might be a potential option.

Melatonin is a natural sleeping aid that most dogs tolerate well. It’d be anywhere from five to six milligrams depending on the size of the German Shepherd.

Once again, consult a professional before giving your dog any pills. It could potentially interfere with other medication your dog is taking, or there could be other issues.

Also, consult a professional if you can’t get your dog to start sleeping enough. Another reason that your German Shepherd might be struggling to catch a few Z’s is that he/she has arthritis. This is a thinning of the cartilage in the joints, making the joints uncomfortable and sleep difficult.

A professional will be able to help you find out what the problem, and give you better advice than any internet blog post.

Sleeping Disorders and What to Do About Them

There are some sleeping disorders that German Shepherds can have, and they can be rather concerning if you don’t know what you’re encountering.

One of these disorders is Narcolepsy. It’s a nervous system disorder that has to do with abnormally low levels of hypocretin, a chemical that helps maintain alertness and normal sleep patterns.

Narcolepsy can be characterized by your German Shepherd suddenly falling on its side asleep, usually after a period of exercise, with its eyes moving back and forth as if it were in the REM cycle.

Another disorder is Insomnia. This disorder is the inability to sleep, and it can occur for several reasons. If your dog practically never sleeps, it probably has insomnia.

One other Disorder is Sleep Apnea. This is a narrowing of the nasal passageway, and it can lead to ungodly amounts of ear-splitting snoring. This can actually wake up not only you and the rest of the house but also your German Shepherd itself.

With any of these disorders, consider a visit for you and your dog with a professional.

Can my German Shepherd sleep in my bed with me? It depends on the dog and the owner. The arrangement might work, it might not. There are potential health risks, as German Shepherds tend to shed, and sleeping on a bed with dog fur practically woven into the fabric of the sheets is never a pleasant experience.

How long should my German Shepherd exercise daily? German Shepherds should spend around two hours a day exercising. This will help them be the healthiest that they can be. Some good exercises include taking your German Shepherd on long walks, or to a dog park.

BONUS TIPS: Is your German Shepherd a picky eater? In working with our breeder, we found our dog much preferred Royal Canin dog food over the brand we were giving her. They offer puppy food

that is designed just for the German Shepherd. If you are considering a change of food, I would definitely give this one a try.