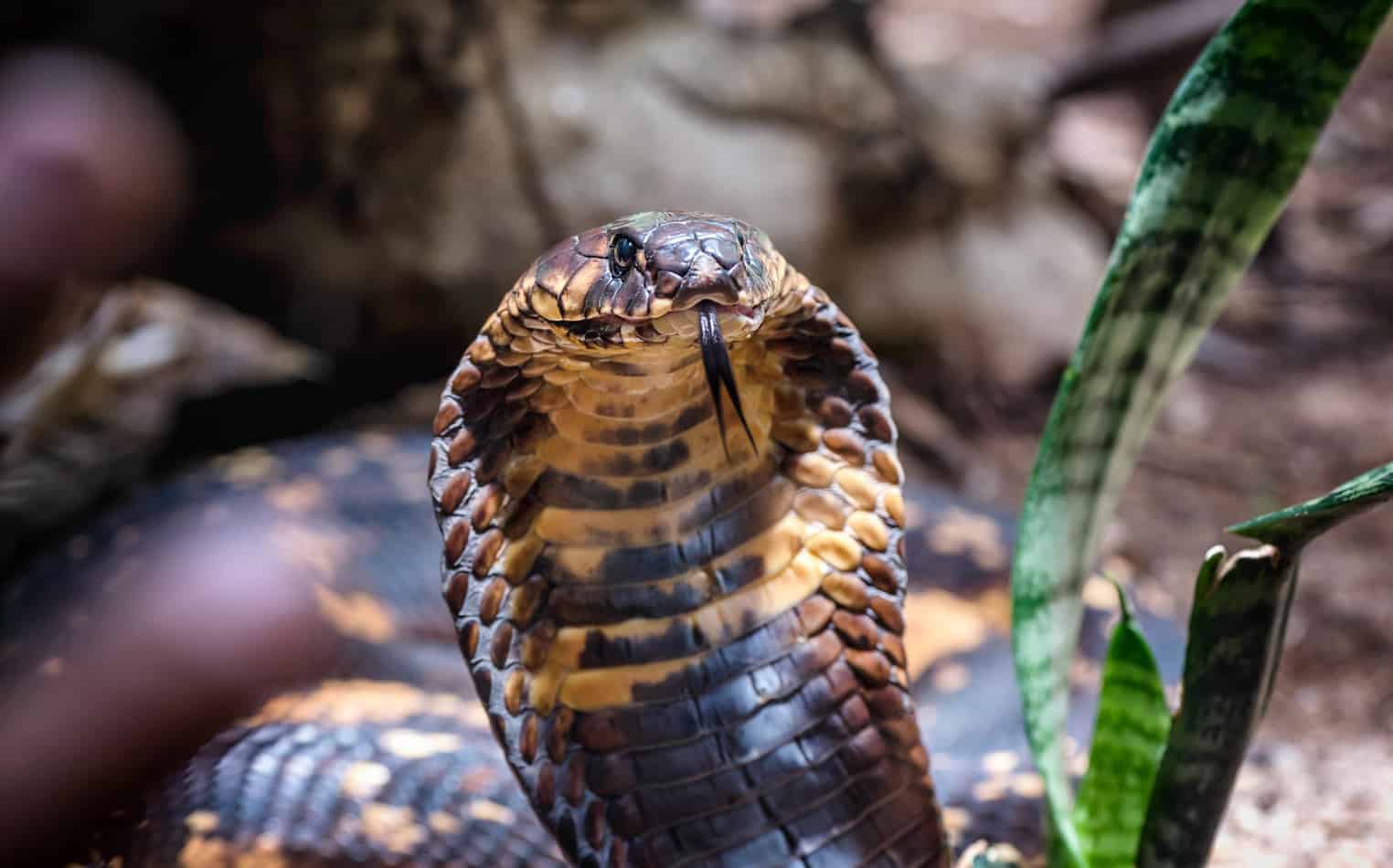 Many snakes lay eggs but not every snake is going to be the same as the King cobra. D the best environments for those snakes to lay their eggs is paramount in breeding snakes properly. Snake breeding is a unique niche in our world, and not many people know how to do it.

How many times a year do king snakes lay eggs? King snakes lay eggs about mid-summer once a year. The eggs hatch in late summer or early fall. They can reproduce every year after they have reached their sexual maturity, usually at 2 – 3 years of age.

If you’re interested in breeding, I have a few tips you might want to know before you get started, especially for king cobras.

The mating time depends on the climate. In warmer climates, king snakes will mate earlier in the spring, while those in colder climates will wait until later in the summer. The mating season has a cut off date, though. It generally starts in March and goes until August.

Males will look for females through a chemical scent. Like many animals, disputes over the who gets the female are solved through wrestling matches between the competing males. The one who wins the battle gets to mate with the female.

King snakes will become sexually mature between 2 and 4 years of age. They can live upwards of 20 to 30 years in captivity. Their lifespan in the wild is not known but is estimated to be similar to those in captivity.

Female king snakes lay clutches anywhere from 3 to 24 eggs in one breeding session. She can carry multiple clutches at a time. The female will lay the eggs in things like debris or a rotting log. Someplace secluded works great in keeping the eggs safe from potential predators.

Strangely enough, the mothers will then leave their eggs. The babies will hatch on their own later in about 2 to 3 months. According to a man named Savitzky, a writer for the acclaimed website Live Science, king snakes are oviparous

, which means that the eggs spend very little to no time incubating inside the mother.

The hatchlings are completely independent from the time that they hatch. They are generally up to about a foot long at this point.

Inbreeding is something that never sounds like a good idea. Probably because as far as humans go, it’s a no-no. With king snakes or just reptiles in general, there is no defined answer. Inbreeding is actually common in .

When done and it works out, it is called “line breeding.” If it doesn’t work, snake breeders call it “inbreeding syndrome”. It is common for wild snakes to inbreed because wild snake don’t venture out too far from home. They return to the same area to breed every spring.

In fact, many people breed brother and sister king snakes. Since it has not proven to be a problem, people will continue to do it.

Try to have them unrelated, if possible, unless you want to do some crazy intense genetic isolation or something. I don’t recommend this if it is your first time around the block.

The point of having this ratio of snakes is that there will be 2 groups of trios. It just keeps the breeding process running smoothly in case one of your snakes die or is less of a genetic gold mine.

You have probably never heard of this word. That’s okay because I had to find out for myself. Brumation is the cooling period during the cycle of the year in order for breeding to be successful. This part is crucial. Without it, you’re not going to have any offspring for your snakes.

There is a pretty intense list of things to do, so buckle up.

According to Tim’s Reptile’s website, you want to start increasing how much you feed your snake in late April, so your king snake has extra fat reserves. It will need these during brumation.

In May, you want to keep your snakes warm with some heaters and stop feeding them for around 2-3 weeks. This allows the snakes to empty their digestive tracts.

In June, you’re going to have to drop the temperature down to 10-15 degrees Celsius for the next 2 to 3 months. Then in September, bring the heat slowly back up to the snake’s usual preferred temperatures. Do not heat up your king snakes too quickly, as this can affect your male king snake‘s fertility. Nailing this process will lead to successful breeding.

What are the different Sub-Species of King Snakes?

King snakes really are “king.” Okay, all joking aside, they really are, because they have the biggest natural geographical range of any land snake (most of the American continent). They cover vast amounts of environments, such as jungles, deserts, and rural areas-you name it, they’re usually there!

They are called “king snakes” because they eat other snakes, even rattlesnakes! They feast on basically any animal smaller than them. Their sizes can range from 18 inches to around 8 feet, so king snakes have lots of choices for meals. Because they have such a wide feeding range, king snakes rein over most other animals.

How often to king snakes shed? The amount they shed varies but you can expect them to shed once every 2 months. In order to grow, they need to shed. The new skin will be bigger.

How long does it take for king snake eggs to hatch? The egg should hatch in about 55 to 75 days after being laid. If some have slit and the others haven’t after a few days, consider slitting them yourself.

How big do king snakes get? Adult-sized king snakes usually reach about 3 to 4 feet, although factors such as genetics, diet, and environment play into how long these snakes can grow.