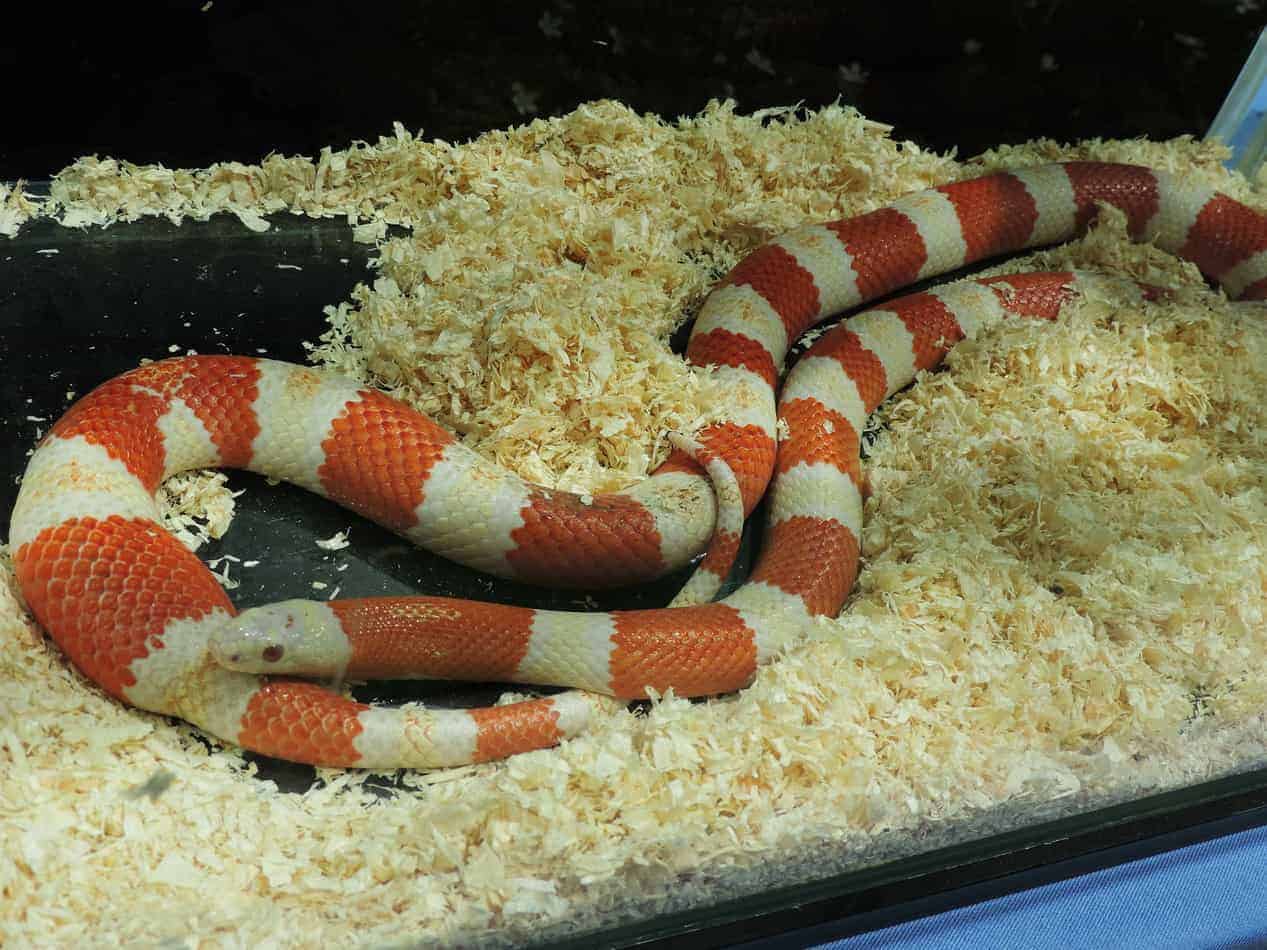 I have always wondered if Milk Snakes would make a good pet because I like the look of them. I also wondered if they are the right breed for me. So I did some research on them to see if they make good pets. This is what I found!

So, do milk snakes good pets? Milk Snakes make great pets because they are not too big in size, non-venomous, vibrant in color, and are easy enough for beginners to handle. They also tend to be a little more shy, especially when younger, but they grow up to be docile and friendly creatures.

Many of those who are looking for a new snake pet may not know where to start or what to expect once they get their own buddy, and it could be a daunting task.

What to Expect With a Pet Milk Snake

Milk snakes are higher up on the list of “most popular breeds for reptile pets”. Their red and yellow bodies that have black and sometimes white rings make these creatures eye-catching, while their laid-back mentality wins hearts. A milk snake would be a great addition to the home of snake lovers as well as it would to a  beginner’s pet to those who are willing to put in the time and effort of caring for one of the friendliest reptile companions on the planet.

Most milk snakes are going to be easy to work with. They have a reputation for being shy but relaxed. Milk snakes are nocturnal and spend a lot of time sleeping or relaxing. Do expect, if you get one of these little guys, that they will not be a big fan of the limelight. They will typically a good chunk of their time in their little shelters (within their terrarium) or tucked into corners. They do like to burrow as well, so keep your terrarium stocked with leaves or dry mulch.

In nature, they often eat small mammals or insects. Don’t worry about that. If you get a milk snake, you just need to feed these guys pre-killed mice. Adult-sized milk snakes will eat about two full-sized mice a week. Be careful to keep your snake housed by itself because there have been cases of cannibalism within the breed.

Milk snakes tend to be shy when you touch them. After a while of owning k snake, they will probably get used to being held. Especially when they are younger, they might be a little nippy and could bite you. This is because of their shy nature and being picked up or being around humans is stressful and creates a defense mechanism. Most snakes of this breed will outgrow that phase quickly. Just make sure you keep your snake happy and healthy.

On average, milk snakes in captivity live to 12 – 14 years. Some even live to be 21. Their lifespan is only about 11 years in nature, which is just another reason to adopt. If you choose one to be yours, it will be with you for many years to come. Be aware of how much of commitment this pet could be.

The Appearance of a Milk Snake

Milk snakes, as I stated earlier, are known for their red and yellow colors. Many people might recognize a picture of a milk snake, but maybe not the name associated with these beautiful creatures. Most commonly, they are red and yellow with black rings (called triads) around their bodies. There are some species that do have white rings as well. These wonderous triads add a bit of excitement and make your pet look exotic with having a sound mind that they are safe.

Milk snakes look similar to coral snakes, but are far less dangerous. Coral snakes are venomous while milk snakes are not. This sometimes has given the milk snake a bad reputation. Luckily though, there is no major danger associated with this breed.

Another aspect in appearance that is a big question is “how big is my snake going to get?” Of course, it varies a little bit depending on which species of milk snake you get but on average, they are about 3 to 4 feet in length. Their enclosure won’t take up too much space but they aren’t tiny either. It’s a perfect win-win situation.

There are more than a couple morphs of milk snakes on the pet market that are available. Here are just a few:

If, at first, you are not sure whether it is milk snake for sure, take into consideration all the different subspecies out there. They seem to share their love of burrowing, of warm areas and have calm countenances.

What to Watch Out For While Shopping For a Milk Snake

There are a few things that you should look out for while selecting your new pal. This advice is not only applicable to milk snakes, but to all snake species.

Look for signs that the snake is having a hard time breathing. Look at its mouth, make sure its pink and it is not inflamed.

Watch its movements, to make sure they are smooth. This will ensure that your snake is in good condition before you take him or her home.

When you take your new pet home, make sure its enclosure is secure. It would be sad if he found a way to get out. Make sure this new home has mulch, something for the snake to play with too. Milk snakes like to climb, so it might be fun for your pet to have some branches to wiggle up.

The place your snake has to live will affect the happiness and healthiness. Snakes need warm enclosures. Make sure to ask plenty of questions too when at the pet shop. Especially for new owners, it’s best to ask more questions so you feel comfortable

Are milk snakes dangerous? Milk snakes are not venomous, so they don’t pose a big risk of danger. They tend to bite when they are newborns but will calm down as they grow. It would be best to keep them out of small children’s hands until they are comfortable around humans and are more grown.

Are milk snakes small? Some subspecies are smaller than others, but on average these snakes are 2 – 4 feet in length. If you are looking for a small milk snake, then the pale milk snake subspecies would be the best option for you.

How did the milk snake get its name? Milk snakes tend to live near farms, and they like to burrow in the hay/straw because of the environment it offers – cold in the summer, warm in the winter. It is likely the proximity to cows and it’s white rings lead to the name. There is a theory that milk snakes got their name because they would latch onto cows and try to get milk from their udders. This was proven to be impossible but is still a largely believed myth.