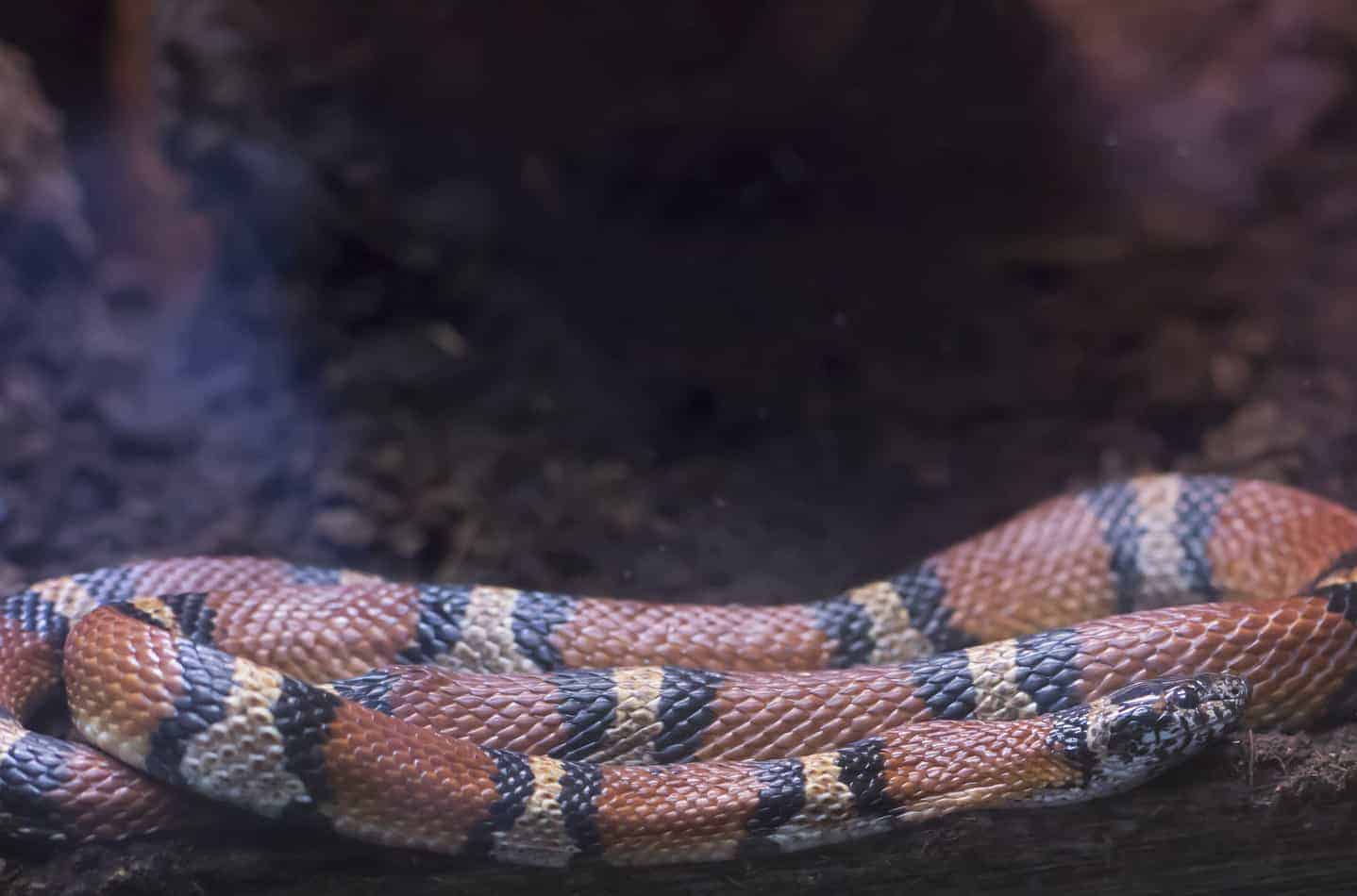 Milk snakes are a favorite pet of the snake lovers because they aren’t as big as some others. But how big do they get when they are fully mature, and how fast will they get there? I did a little poking around and here’s what I found.

How big do Milk snakes get and what is their growth rate? Milk snakes can grow anywhere from 20 to 60 inches in length. The time it takes a milk snake to grow to full size is usually around two years. Genetics and how often you feed your snake play a significant role in how large and how fast your snake will grow.

Many milk snake owners assume that the diet of the snake will not change how the snake grows, but how often you feed your snake can determine how large and how fast it grows.

Milk Snakes are anywhere between 3 to 5 feet in length. When they are born they are around 6 inches long. They will grow rapidly at first to survive but their growth rate will slow as they approach 2 years of age.

The growth rate of a snake is similar to that of a human. Humans experience growth spurts throughout their infancy and adolescences. As humans grow older, they stop growing and begin to maintain what they have already gained.

Snakes go through a similar development but experience it on a much quicker scale. The time it takes a snake to reach full maturity is only three years.

FUN FACT: Milk Snakes are called such because people used to believe they would suck the milk from the udders of cows. This is untrue but an interesting thought.

. A person who eats more, healthier food, will tend to grow bigger and stronger than those who go without. Eat too much food and it may cause harm to your bodies growth. Too little and you will not have the strength needed to develop important muscles. This principle can dramatically change the way your snake grows.

Some have long observed that if you feed your snake more it seems to grow faster. Recent studies have found that is, indeed, true.

A group of students fed their snakes double the regular amount and compared their growth rate to those that received the normal diet. All snakes were kept in the same plastic shoeboxes and no snake received any extra nutrition from non-dietary sources. The results were astonishing to everyone.

What this group of students found was that a snake that is fed twice as much will, in fact, grow double the size of his fed-once-a-week compatriots. Now, mind you, that this is in diameter, not length, although they tended to be quite a bit longer as well. The experiment was a success. The better-fed snake gets to be much larger.

Now, a word of caution. While it may seem like giant snakes are better and healthier this may not be the case. The biggest snake isn’t necessarily the best snake. I have read of cases where snake being fed too much will grow disproportionately. Picture a snake with a giant tail, and a small head not fun.

This could shorten your pet snakes life-span, or cause him great pain when he reaches maturity. The test results are interesting, but it is better to stick to the recommended quantity of food for your own milk snake. You wouldn’t want to make any person you know and love unwittingly large and fat, have the same courtesy for snakes.

What Happens If Your Snake Isn’t Growing?

A lot of milk snake owners are concerned that their snake doesn’t seem to be growing as fast as they think it should. While it is true that you should normally see some growth within the first few months of a snakes life that isn’t always the case.

Some snakes just need a little more time before they begin their first growth spurt. Other snakes are just smaller and don’t get that big due to genetics. Now, there are a few reasons your snake may not be growing. This may be due to:

Let’s briefly exam each of these to see how you can fix your problem.

Let’s say your snake seems to be eating fine. Once a week you place a pinky mouse in your snake’s enclosure and he happily gobbles him down. You repeat this process week after week, month after month, and yet you don’t seem to notice any change in your snake’s length in diameter.

You may want to increase the amount you feed your snake to two mice a week. As we previously discussed, this can be dangerous, but only when your snake is growing at a normal rate. Feel free to try this to see if this energizes your snake at all.

If you don’t feel comfortable upping the number of mice, try moving from pinky mice to fuzzy mice, which are larger and may be enough food to the snake the strength it needs to grow.

A snake may stay stubbornly small if their habitat is lacking in certain resources. A proper bed, for example, could provide your snake with a place for adequate rest. Then he may begin to grow.

In my research, I have found that one of the most common reasons a snake won’t grow is due to temperature. A poorly regulated tank could lead to a snake in poor health.

A milk snakes cage needs a heating pad at one end keeping it anywhere from 80 to 90 degrees Fahrenheit depending on your particular sub-species of milk snake. Do a little research on your snake, and play with the temperature to see if you get any results.

Stress on the Snake

In middle school, I was shorter than everybody else. Growing to a measly 5-foot nothing by the 7th grade, my large 5-foot five friends towered over me like Goliath over David. To this day I blame the stress of those cruel years on my modest stature today (I’m only 5-foot seven.) I tell you my tale of woe so you can better understand how your snake feels.

Snakes can also feel stress and this may impede their normal growth. Is your milk snake living with other snakes? Even if their snakes of the same species, it may be feeling stressed out dealing with the competition. Does it have adequate water or clean substrate? Insufficient resources can be hard on the delicate psyche of a snake.

Look, you wouldn’t like crawling around on your belly through rough irritating sand, so your snake probably doesn’t either. Make sure your little guy is comfortable and maybe that will persuade him to grow a little.

Why do snakes shed their skin as they grow? We have to remember that snakes are not mammals and their skin does not grow as they do. When a snake grows o big, the outermost layer of skin becomes to tight, and a snake will slide right out of it. When a snake leaves it’s old skin behind, the new skin immediately underneath it appears vibrant and shiny.

Do snakes ever stop shedding? A snake will keep shedding their skin as long as they continue to grow. Snakes continue to grow throughout their entire lives, even though the rate of growth slows dramatically when a snake reaches maturity. A milk snake, as we said earlier, reaches maturity at about two to three years, and will not shed as much after.

Are snakes getting bigger? I have heard rumors of some claiming that wild snakes were growing larger than their ancestors. After a little it seems this may be true. Python discovered in the Florida Everglades seem to be much bigger than their cousins in the old world. This may be due to living in areas previously uninhabited by snakes.

Zach grew up having small pets in his home. Most of which lived in an aquarium or terrarium. In recent years, Zach has found a new love of dogs after spending many hours volunteering with his local animal shelter. Zach has been a writer for Embora Pets since early 2019 and has become a valuable addition to our team.