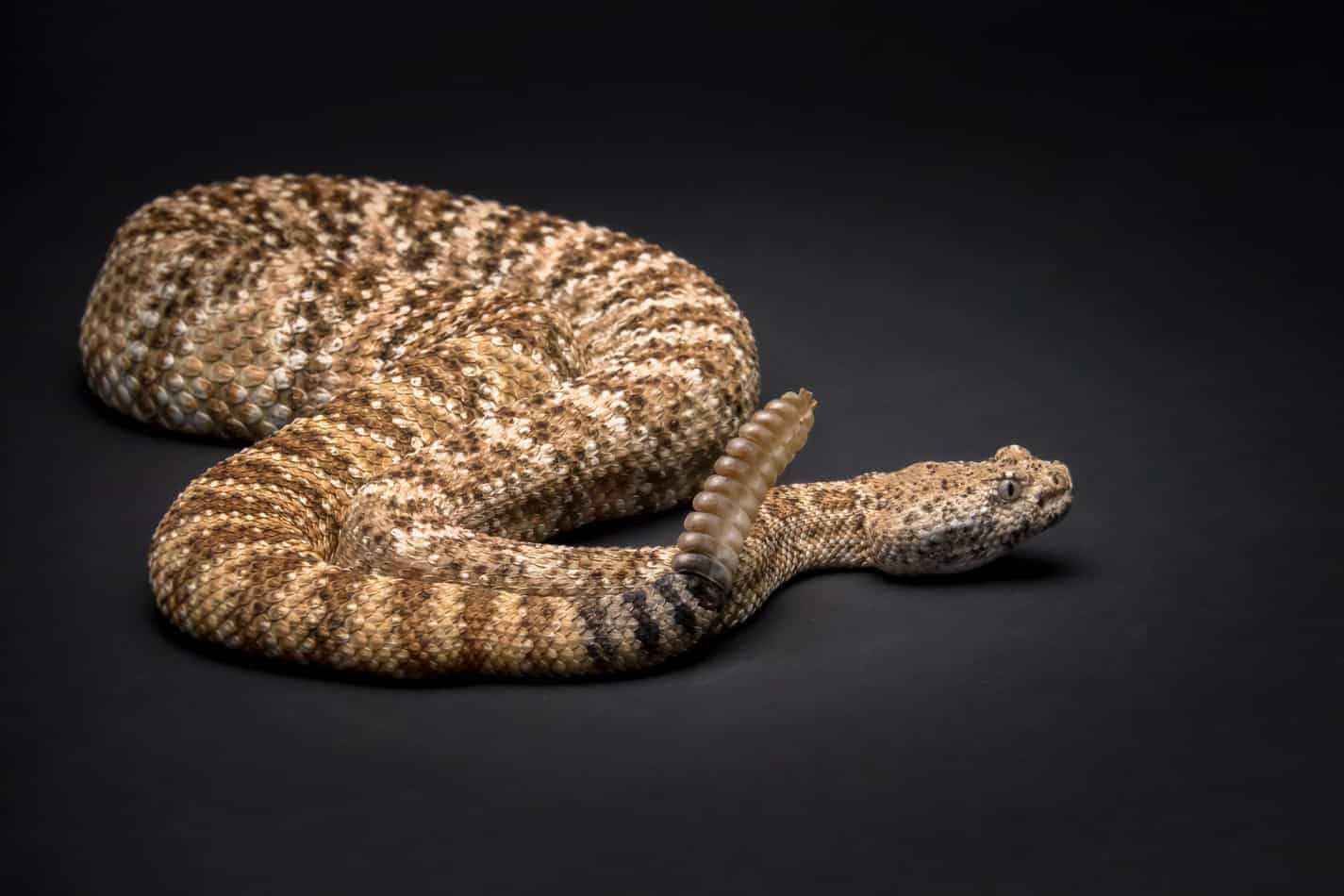 Stepping on any rattlesnake especially a  rattlesnake is the fear many American hikers have when they go hiking. To me, they are pretty much terrifying, and because of that, I wanted to know more about them. (Know your enemy, right?)

These amazing snakes are curious creatures, that can be deadly. These guys are  worth the research, but don’t get too close.

What is a Mojave Rattlesnake?

A Mojave rattlesnake is one of the different subspecies of rattlesnakes.  This snake is a pit viper and likes to hang out in rodent burrows and in other clever hiding spots.

Mojave rattlesnakes are found from California to Texas and then down to Mexico. Huamantlan rattlesnakes, on the other hand, are found only in a few cities of Mexico:

Where do Mojave Rattlesnakes Live?

So, we know that the two different types of Mojave rattlesnakes live in different regions of the United States and Mexico, but what states can these dangerous snakes be found in? On top of that, where are they most likely to be found? W is their habitat like?

In the United States of America Mojave rattlesnakes are found in:

Mojave rattlesnakes are found all over the southwestern United States which can seem to be a little bit deceiving because they are named after the Mojave desert in California.

But these snakes cover a lot more ground than just the Mojave desert and get to cause problems in loads of places instead of just one.

The climate for Mojave rattlesnakes is hot and desert like. They don’t live in elevations higher than 5000 feet and lower than 500 feet. Living mainly on lower mountain slopes or higher in the high deserts.

Mojave rattlesnakes prefer to be around bushes than living in rocky areas. Within these desert areas Mojave rattlesnakes can most often be found in semi-grasslands, cactus scrub, desert wash, areas that are scattered with creosote bush, or mesquite trees.

It was mentioned before that these snakes are highly toxic, but if you’re like me when I read this you’re thinking, “Duh, aren’t all rattlesnakes venomous?”

They cause very different effects on the bodies of their victims and they have different potencies. Below is a table that explains the differences between these two strands of venom.

Surprisingly, receiving a bite from a Mojave rattlesnake is not as painful as most snakebites, but they are just as deadly, if not more deadly. So, it is always best to go to the hospital immediately after being bitten, so that the doctors can treat you.

Despite popular belief, fatalities from snakes bites are uncommon because of the wide variety of snake antivenoms that are available.

Mojave rattlesnakes are a medium-sized rattlesnake and only grow to be about 2-4 feet in length. They have a diamond pattern on their backs, and because such, are often confused with diamondback rattlesnakes.

The main difference though is that the Mojave rattlesnakes’ – unlike diamondback rattlesnakes – diamond pattern fades into stripes at the bottom of their tail right before their rattler. These stripes tend to be black and white with the white being thicker than the black.

How do Mojave Rattlesnakes Inject Their Venom?

We know that Mojave rattlesnakes are very venomous and that their bites don’t hurt as much as normal, so the question then becomes, “How do they inject their venom?”

Mojave rattlesnakes, like most pit vipers, have two retractable fangs that are hollow and are connected to two glands that are filled with and produce their venom. These glands are actually in the rattlesnakes’ checks.

Mojave rattlesnakes that have hemotoxic properties in their venom use this to start helping with the digestive process and immobilizing their prey by causing internal bleeding and tissue decay.

Mojave rattlesnakes that have neurotoxins in their venom use their venom to paralyze their prey and even stop them from breathing. If the bitten prey of either of these types of venom happens to move away before it dies the Mojave rattlesnake can follow/find it through its sense of smell.

What do Mojave Rattlesnakes Eat?

These are the most common food source for Mojave rattlesnakes, although these rattlers have been known to eat other small snakes, toads, and even insects when needed.

Mojave rattlesnakes are nocturnal and like to be on the move at night. They typically go out hunting and look for their prey hiding in their holes.

Another way that these rattlesnakes hunt is they find an active rodent burrow and then lie in wait for their prey to come to them.  They have gotten especially skilled at their hunting skills and habits.

How do Mojave Snakes Reproduce?

Mojave snakes are a little unique in the fact that they hibernate during the winter. They are not the only snakes that do this, but it isn’t a popular quality in a lot of snakes.

Because the Mojave rattlesnake hibernates during the winter it makes their mating and reproduction cycle different than other snakes.

A male picking up on her scent will follow the pheromones until he finds the female responsible. Often two male rattlesnakes will try to breed with a female and will engage each other in a very detailed combat dance.

The winner of the dance off will then slither to be side by side with the female Mojave rattlesnake, and make sure that his cloaca is even with hers. After that, the mating begins and the male sticks his two hemipenes in the female’s cloaca and releases his sperm. This can take a couple of hours.

After a female has been inseminated she actually holds the male’s sperm inside her all winter. After she comes out of hibernation in the spring the sperm is activated and the female can become pregnant. Most female rattlesnakes in general only reproduce about once every two years.

Female Mojave rattlesnakes are not like most other rattlesnakes because they are ovoviviparous. This means that they have eggs but instead of laying them unhatched the female will actually carry them around inside her until they hatch; then she will give live birth to her hatchlings.

Mojave rattlesnakes are very much so like other snakes in the sense that their mothering instincts go as far as to give birth and nothing more. After giving birth to her hatchling the Mojave rattlesnake mother leaves them to fend for themselves and find their own food.

Most people hear that being abandoned at childbirth is sad, but for most Mojave rattlesnakes this is all they have ever known and is not a stumbling block for them. After being set free after birth, the baby Mojave rattlesnakes go off on their own to find food and have their first meal.

Having no parental guidance, these little rattlers grow up fast. At about one to two weeks a baby Mojave rattlesnake can expect to shed its skin for the first time. Doing so begins to create the little Mojave rattlesnake’s rattler.

The first shed will create the button like beginnings of its rattler that then forms the base for all consecutive buttons. Each time these baby rattlers shed they will add a new button on their tail; this process  stop until the Mojave rattlesnake has died.

What are the Differences Between a Mojave Rattlesnake and a Diamondback Rattle Snake?

As was mentioned before, a lot of people can confuse and mix up Mojave rattlesnakes with diamondback rattlesnakes. They do this mainly because of looks, but I have compiled a list that goes through most of their major differences.

There are other differences between Mojave rattlesnakes and diamondback rattlesnakes other than looks. The places they live stand as a strong example.

While some of their habitats overlap diamondback rattlesnakes can be found all over Texas, Arkansas, and Oklahoma, which are places where you cannot find any Mojave Rattlesnakes.

The last and biggest difference is their venom and their aggression. Diamondbacks aren’t very aggressive whereas Mojave rattlesnakes are extremely aggressive and are more likely to bite humans.

Being bit by a Mojave rattlesnake could very easily kill you and so medical attention is needed immediately.

What are the Symptoms of a Mojave Rattlesnake? The symptoms of a Mojave rattlesnake bite are first having the puncture wounds. Then there will be pain tingling and burning around the wound. The area of the bite will start to swell and bruise. There will then be numbness and weakness with some added lightheadedness, followed closely with a hard time breathing.

Can a Baby Mojave Rattlesnake Bite Kill You? Although it is said that the bite of an adult Mojave rattlesnake is worse than of a baby, they are both serious and need medical attention. They can both cause serious problems and even death.