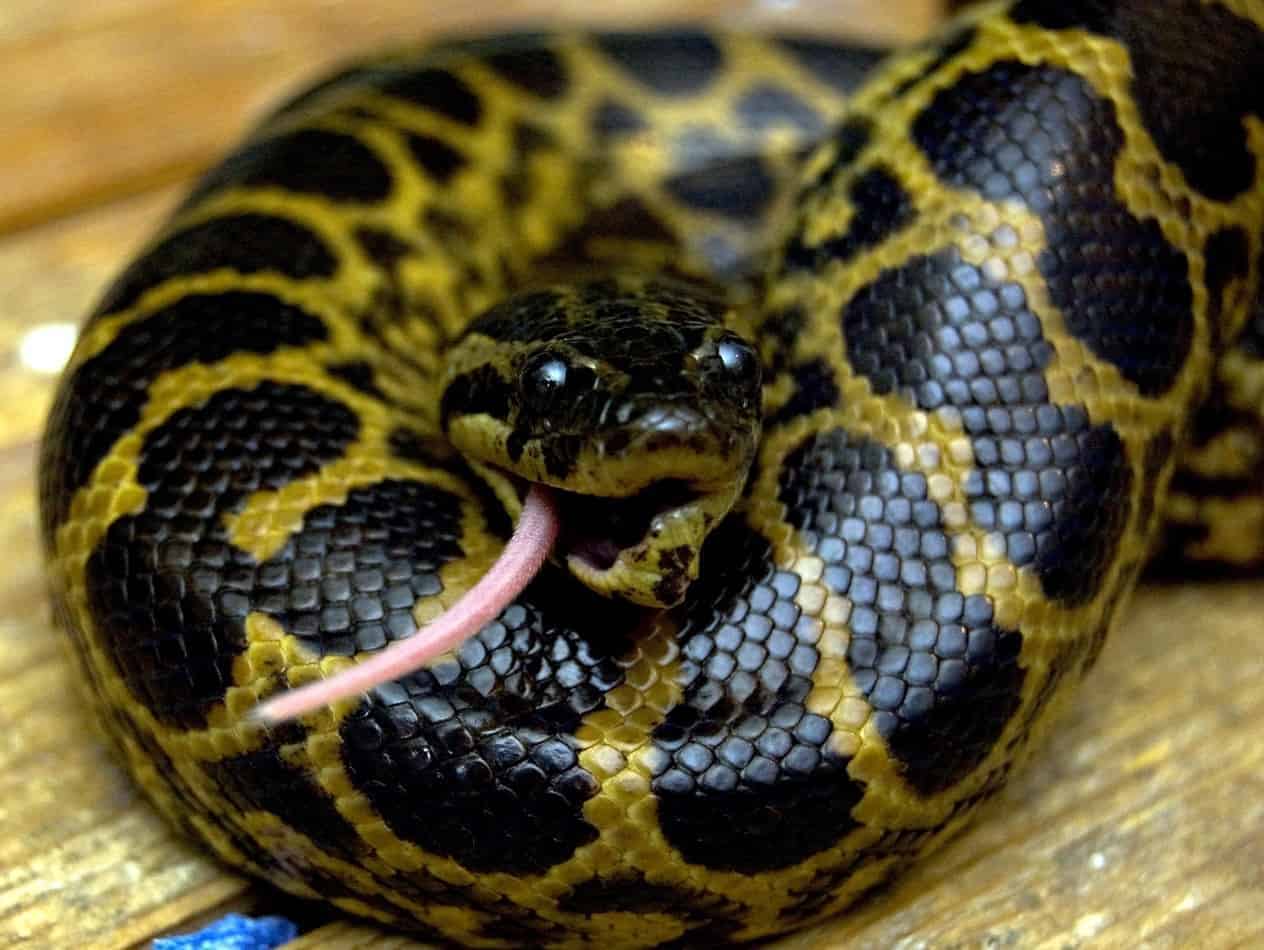 Being a curious person I did a little digging on the anaconda to see if it was poisonous or not. There are a lot of venomous snakes out there and quite a few that we should be scared of, but who really knows which snakes are venomous or not. Well, I found out about the anaconda and wanted to share what I learned.

So, is an anaconda poisonous? Anacondas are not poisonous. Instead they use constriction to kill their prey. Once they have sighted their prey, they strike and bite it. Locking in their bite, the anaconda wraps its body around its prey until they die of either suffocation or from crushing.

Even though anacondas are not poisonous they can be extremely dangerous. Many people wonder if anacondas can eat humans and if they may consider us prey, or where the anaconda lives and what they do eat. Well, when I was studying the anaconda’s poison status, I found the answers to many of these questions.

Anacondas need to eat like all living things, but the strength of an anaconda lies in its muscles and bite. Snakes that use venom normally bite their prey and then the snake will follow its sent trail, wait for it to die, and then eat it.

Anacondas are strong and as such, they do not need venom to help them acquire a meal. Instead, they use their constriction skills and are very good at it.

Can an Anaconda Eat a H?

There is no evidence that an anaconda has ever killed and eaten an adult human being before, but that is not to say that it isn’t possible. In order for this possibility to occur though, the anaconda would have to be the right species, a green anaconda, and large enough that it could fit the whole human in its body.

There are a lot of people who claim to have seen this happen and even a few that have tried to be swallowed by the anaconda, but for now, this will have to remain a mystery to us all. So, although we may not know if they could eat you, they are very capable of killing you and, as such, can be considered a deadly species.

Where do You Find an Anaconda?

Anacondas are native to South America and are found in a variety of countries there. There are four types of anaconda and they all live in different regions.

Anacondas are also known as water snakes and like to live in marshy and swampy areas as well as  streams.

What do Anacondas Eat?

Anacondas are rather large reptiles and, as such, their diet tends to be rather large as well. The normal diet of an anaconda can be very vast and includes the basic staples of:

While this makes for a pretty impressive diet, anacondas have also been known to consume animals like:

Needless to say, this predator’s diet makes them seem all the more terrifying and fascinating.

How Long do Anacondas Get?

The anaconda is one of the longest and heaviest species of snakes living in the world today. These creatures can reach multiple lengths and sizes depending on the species.

Needless to say, these reptiles are huge and can grow to be as long as a bus.

Can You Have an Anaconda as a Pet?

Anacondas can be kept as pets on certain conditions. For example, it is not suggested that someone under the age of eighteen (18) or someone with limited reptile knowledge should obtain one. They do get very large and their strength should be kept in mind when considering them for a pet. One must have the proper space to keep the anaconda and the ability to keep it fed properly.

When considering an anaconda for a pet, you have to remember that these snakes are aggressive and very capable of killing an adult human. They are very expensive to maintain and, as I mentioned before, require more space than most houses can accommodate.

A ten-foot long snake can be expected to consume one hundred (100 lbs) to one hundred and fifty (150 lbs) pounds of food a year.  Keep in mind that anacondas can get as long as thirty-five (35 ft) to forty (40 ft) feet. That is a lot of food!

Before getting an anaconda as a pet snake, it is suggested that hopeful owners do their research and are fully prepared for the dangers and responsibilities of an anaconda.

What are the Physical Characteristics of an Anaconda?

When most people think of an anaconda, they think of the green anaconda, but anacondas can actually be yellow and brown. Anacondas are very thick muscular snakes and although they have very thick necks, their head is actually rather thin and large.

Their nostrils and eyes are on the tops of their heads so that they can see and breath when under the water. They have pretty distinctive markings, including a thick stripe that runs from the eye to their jaws.

Andacondas actually have spurs on their tails and they are generally bigger on males than on females. These creatures are beautiful and unique in their own right.

Are anacondas fast? Although they are slow and almost clumsy on land, anacondas are can be very fast in the water. So if you are ever being chased by an anaconda, stay on land and avoid going near bodies of water.

How long do anacondas live? In the wild, an anaconda will only live for around ten to twelve years, but anacondas that are kept in captivity have been known to live closer to thirty years.

Are anacondas aggressive? Anacondas are very aggressive snakes and are known to be even more aggressive than the Burmese Python, and as such are not attacked by or challenged by many other species.

link to Why Do Bichons Whine So Much?

The Bichon Frise is an adorable, fluffy little dog that is known for being very sensitive and having excellent communication with their people. Unfortunately, some people notice that they can tend to...

Continue Reading
link to Do Bichon Frises Sleep a Lot?

You may know that the Bichon Frise isn't the most high-energy breed out there, but how much do they actually sleep, and will their sleep patterns match yours?  Do Bichon Frises Sleep a...