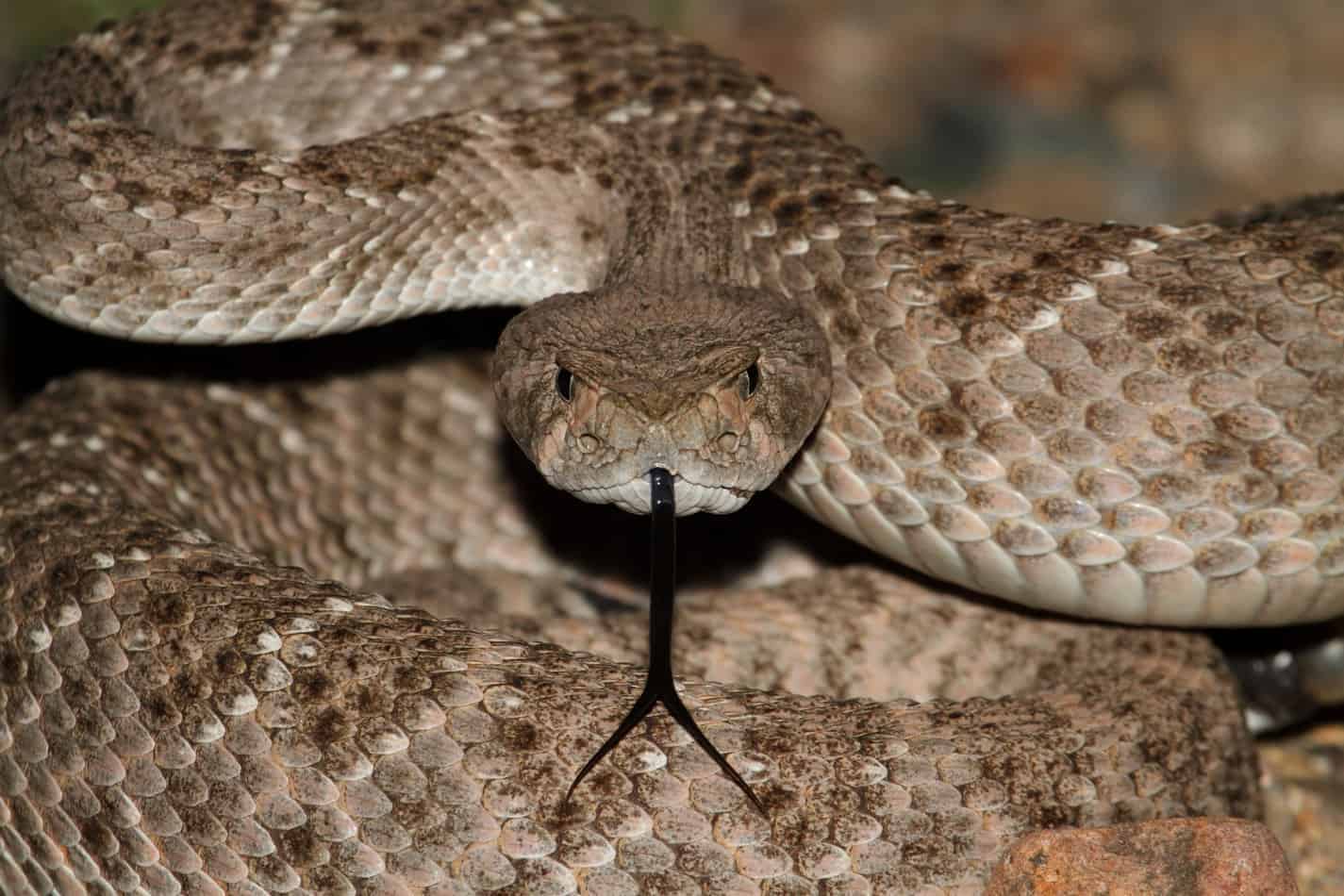 I have often wondered whether or not rattlesnakes can be kept as pets, and I bet there are others like me out there. We all have that sensible subconscious, the one that warns us to stay as far away from animals as possible, but everyone has a daring side too. We can’t be blamed for wondering: Venom and violent nature aside, can rattlesnakes be kept as pets?

Can rattlesnakes be kept as pets? If you live in Arizona, Kansas, or Delaware, then the answer is simple: you cannot have a pet snake—not legally, anyway. But if you live in any other U.S. state, and if your venomous animal license is up to date, then you can totally own a rattler. No one will stop you.

However, even if it’s legal, you might want to think twice before heading out to capture one and keep it as your newfound best friend. Rattlesnakes are incredibly dangerous and, if kept as a pet, immensely demanding.

What Accommodations Should I Make for My Pet R?

First things first: Before buying a rattlesnake, you might consider brushing up on its typical behavior patterns and learning how to act in its presence. You’ll need to adhere to the same rules around your pet at home as you would in the wild: Don’t walk around your house in the dark with bare feet and no flashlight unless you’re sure that your snake is locked safely in its tank.

If you have loose rodents on your property, get rid of them. Your snake will sense them and do what it can to find them, even if that means breaking out of its enclosure. Don’t make sudden movements around your snake, as you could agitate it. (Yes, this is still important if your snake is locked in a terrarium.)

If you own a baby rattlesnake, do not underestimate it. Young rattlesnakes are easier to lose track of, and they haven’t yet developed their warning rattle, which gives them the advantage of stealth.

If you have children, or if there are elderly or disabled people in your home, getting a rattlesnake is a flat-out bad idea. Only those with a significant knowledge of the species and an ability to handle the situation if things go south should be allowed near the snake.

If you have any other pets, keep them far away from your rattlesnake. Canines especially tend to act excited or friendly toward rattlesnakes, as they consider the warning rattle an invitation to play. It is no such thing, and if your pet angers the rattlesnake, it will wind up with a fatal bite.

Furthermore, you must be willing to invest some serious time and money into your new pet. Rattlesnakes are fairly high maintenance. You’ll need to vaccinate your snake, purchase antivenin (medication for a rattlesnake bite; it can cost hundreds of dollars per vial), and order a hefty terrarium, in which the snake will live.

Ideally, this enclosure should be kept in a garage or shed, separate from your main living area. You should check the tank daily for cracks and holes that the snake could possibly escape through.

You’ll need to buy a shift box to secure the snake in when it’s out of its tank. A shift box locks from the outside and ensures that your snake won’t slither away as you transport it or clean its terrarium. Shift boxes generally sell for 80 to 150 U.S. dollars.

Finally, rattlesnakes demand a pretty strict diet of small rodents. You’ll want to purchase pre-killed mice and rabbits, as live prey can scratch, bite, and injure your snake in defense. Occasionally, rattlesnakes will eat insects, but they can’t survive on bugs alone. Adult rattlesnakes eat about twice a month, but younger snakes can feed every week. Be prepared to keep up with your pet’s eating schedule and dietary needs.

Why Shouldn’t I Get a Pet Rattlesnake?

Snakes of any species are incredibly skilled escape artists. They have very little difficulty getting out of even the most sturdy enclosures. You’ll need to take great care in transporting your snake and cleaning its tank, as a rattlesnake on the loose can wreak havoc on your life. (I’m not kidding! Rattlesnake bites without immediate attention can result in severe medical problems or death.)

Snakes are obligate carnivores, meaning that they’re hardwired to think like defensive predators. While many snakes have been proven to bond with their owners, rattlesnakes included, friendship will hardly stop them from biting when frightened or aggravated.

If you’re not an expert on venomous animals, the likelihood of complications with your pet rattlesnake is extremely high. Sure, rattlesnakes look super cool. But they’re probably not worth the hospital bills or losing someone you love.

Can rattlesnakes be tamed? Unfortunately, no. Rattlesnakes are meant to live in the wild and would require generations of forceful domestication before they could be considered even slightly “tamed.” Consider this: Dogs are considered man’s best friends, but, sometimes, their primal instincts still manage to take over, resulting in –4.6 million dog bites per year. Rattlesnakes are far more predatory than dogs and each rattlesnake bite contains life-threatening venom. The chances of these reptiles ever being domesticated are slim to none.

Where can I buy a rattlesnake?If this article hasn’t quite deterred you, there are plenty of rattlesnake-purchasing options out there. Underground Reptiles is one of the foremost sites for venomous pet acquisition in the world. (Granted, there aren’t very many related sites out there.) The snakes on this website are reasonably priced and, I’ll admit, somewhat intriguing. Before you place your order, though, I can’t stress this enough: Learn about the snake you’re buying.

Should I Get a Wild Rattlesnake? I don’t recommend that you head into the Rocky Mountains (or, if you live in country like I do, your backyard) in search of a snake. Such ventures are incredibly treacherous and usually illegal. Locate a reliable vendor and, as I’ve mentioned multiple times thus far, learn all you can about rattlesnakes before investing in one. I wish you the best of luck in your bold endeavors, but I hope never to meet your new pet.

Marryn is a long time pet lover. There has always been a soft spot in her heart for dogs. Although she has owned many dog breeds in her lifetime, poodles and poodle mixes have become her favorite. Currently, she has two pups named Sally and Luna.