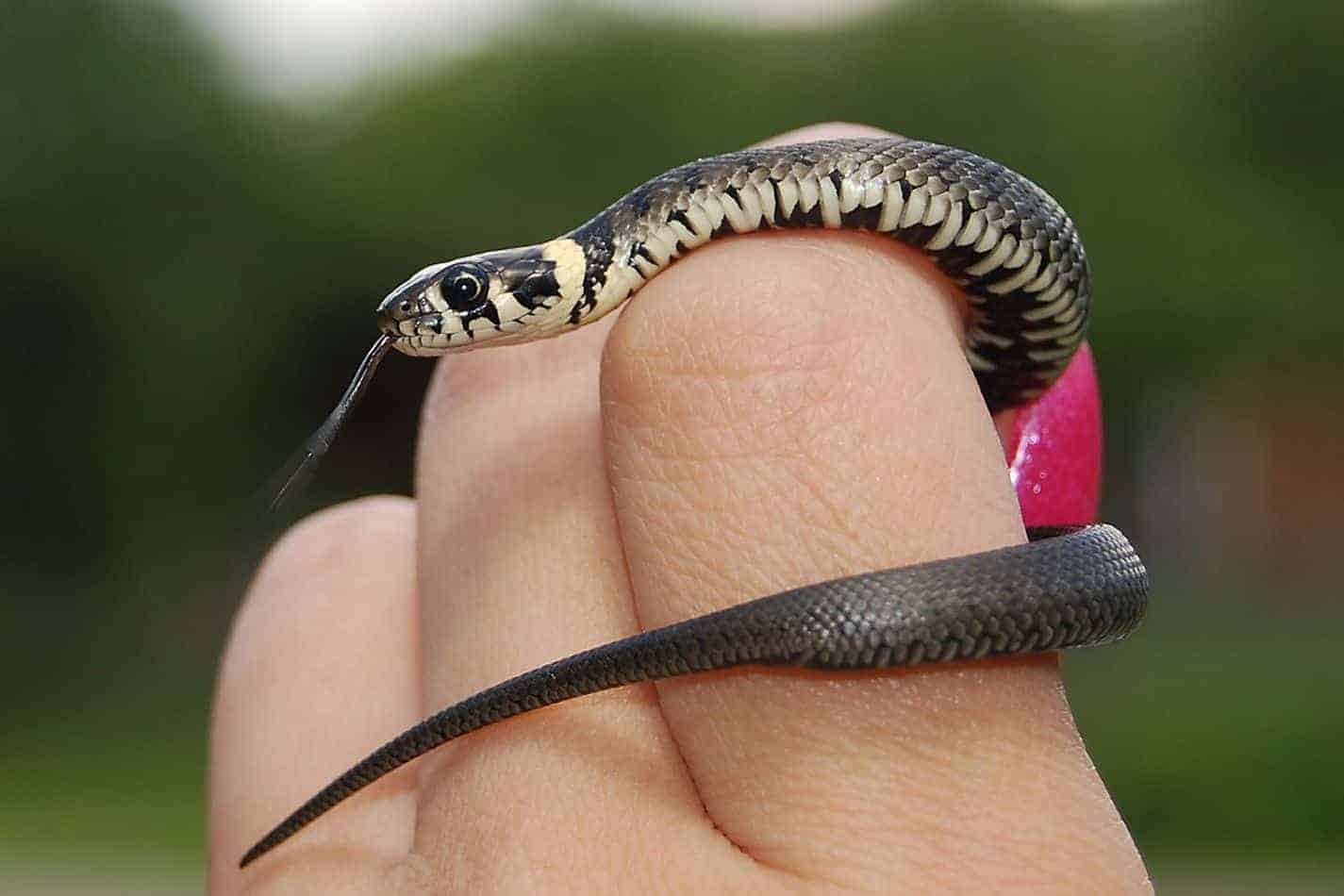 A while back, I was looking into getting a new adorable snake as a pet and I didn’t know where to start. So, I researched extensively for the cutest snakes out there and this is what I found.

So what are the cutest breeds of snakes that make good pets? The top four cutest snake breeds out there are Hognose Snakes, Corn Snakes, Carpet Pythons, and African Ball Pythons. These unique yet beautiful snake breeds vary in size, color, and temperament.  These breeds all make great pets for those in search of a nontraditional companion.

Honestly, all snakes are winners. These breeds have topped the charts in levels of cuteness. They also happen to be (for the most part) docile and fun to look after.

This snake ranks #1 on the list for the cutest snake. With their big eyes and petite snout, how could it not be the most handsome little snake on the planet? These guys can range from colors like blue, tan and brown, red, and they can also have black and tan spots on its back.

In the wild, they are found in warmer regions like the Central United States and the Northern Region of Mexico. These little darlings are harmless, thus making them very nice pets.

Hognose Snakes have an average lifespan of 11 years and usually eat smaller pre-killed mice and when they’re younger they eat crickets. Most Hognose Snakes aren’t that big, but some can get up to just over 4 feet long. Any kind of Hognose Snake you get will sure be a beauty.

One of the best thing about Hognose Snakes is its attitude.

Hognose Snakes are known as one of the least dangerous snakes out there. If owning a pet snake might scare your spouse or child, it should comfort them knowing that even in the rare event that a Hognose Snake was to bite, it’s venom is not strong enough to cause any real harm to humans.

Hognose Snakes are the most docile, laid back and prettiest breeds on the planet. Who wouldn’t want a snake that has snout like a pig? One of the best thing about Hognose Snakes is its attitude. This little guy has to be the most adorable option for pet in the world.

Corn Snakes come in at a close #2 as the cutest pet snake breed because of their beautiful colors. Of course, as most things do, snake color varies between the individual snake but Corn Snakes often have a vibrant red-orange colored back with a pale yellow stomach. This breed was actually named after their yellow tummies because it’s so similar to the color of Indian Corn.

Of course, they can be other colors too! Corn Snakes can also be brown, black, tan, and have black stripes or spots. They also can have red or orange eyes which make these beauts even more precious. It really just depends on the species you get but they really are all winners.

Corn Snakes can be found in the wild usually East of the Mississippi River. They also are not dangerous to humans because their venom isn’t potent enough to hurt anything that big. They mostly just keep the mice away. Beautiful, usefull, and sweet? What a triple threat!

Adult Corn Snakes range from 4 – 6 feet in length and have an average lifespan of 7 years. These handsome fellas eat pinky mice, pre-killed of course. Really, they aren’t that high maintenance which is a nice thing to take in to account when looking at pets, especially if you are a beginner.

This breed makes an awesome pet to those looking for a mid-sized snake with amazing color. They are also more of a beginners type pet because they are easy to feed and take care of once you know their eating habits.

These guys come in many colors and fashions. If you would like to know more about these morphs, click here

for a full article talking about everything you would need to know about corn snakes, including more pictures!

Carpet Pythons clock in at #3 on the all-time cuteness list for pet snakes. Carpet Pythons are a bigger breed available to have puts and will awesomely showcase the power and might of reptiles. If you have the room to house a Python, I highly recommend it.

When you tell your neighbor you just bought a pet snake, this is the kind of snake they imagine.

Most Carpet Pythons have a tan or yellow body with black spots or diamonds on their back. Their beauty is found in these special little designs that are all different from each other. They look like the classic, traditional, send-chills-down-your-spine snake.

These guys are fed rats because they are bigger than the other snakes on this list. In the wild, they actually eat smaller reptiles, birds, and mammals. If you’re planning on getting this guy, be careful to keep your cat away from him. He definitely has a big enough stomach for it.

They can vary between 4 – 10 feet long depending on which species you decide on. Really, the cutest thing about this Carpet Python is its unique designs and patterns on its back, and it’s triangle shaped head. Don’t even get me started on the little tongue.

Carpet Pythons will also be a good pet because they live on average 20 – 30 years. Talk about a true companion. Dogs have nothing on this breed!

These cutie pies are relatively small compared to their other python friends. African Ball Pythons are recognizable because they often curl in a ball (how adorable is that?!) and have a nice banana-yellow color to them. They also can be brown, black, and white with patterns along their back.

The cutest thing about this breed is that they are so shy but so well behaved!

Really, they curl up into a ball and usually try to make themselves as small as possible. That’s how they got their names. This means they are generally safe and try to avoid conflict.

Not only can they curl into a ball, in the wild, but they also use this ball-form to escape and roll away from predators. This is a great way to keep themselves safe, even if it is a bit untraditional.

African Ball Pythons are on average 3 – 4 feet in length. They also live for a long life of 25-30 years so your little guy will be sticking around for a while.

In the wild, Ball Pythons might eat, things like small birds or mammals, maybe even a frog or two. As pet though, you only need to worry about feeding African Ball Pythons pre-killed mice, some even like to munch on raw chicken.

These guys are fun to hold and great to show off to your friends and family. Ball Pythons are calm and are happy to spend some time out of their terrariums after getting comfortable with you. They’ll even snuggle up to you. There is no better feeling in the world than a snake buddy that you can hold. I recently wrote an article titled 26 Cool Facts about Ball Pythons, that contains some recently interesting information that even I was surprised about! You can find it here.

What are the friendliest snakes? Generally, the friendliest, most docile snakes are Corn Snakes, the California King Snake, Ball Python, Hognose Snakes, and Rosy Boa. 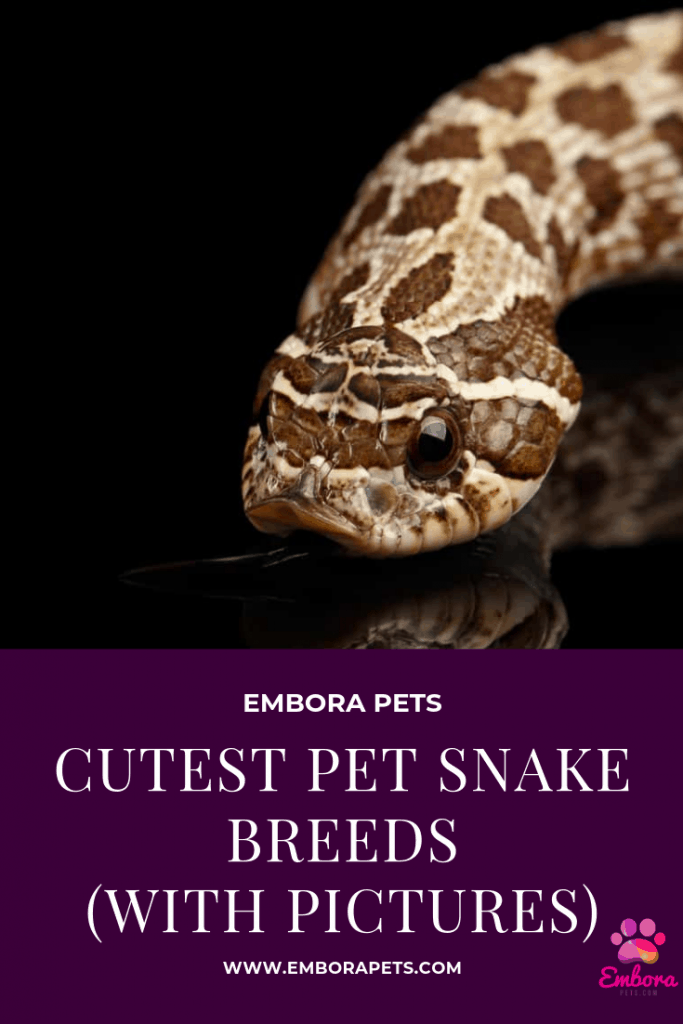 Are pet snakes dangerous? There have been incidents where pet snakes have harmed their owners. Common pet snakes are not regarded as dangerous but other exotic and venomous snakes can be. Remember, just as dogs or cats have attacked owners, it is possible for snakes to pose a risk.  Snakes that are smaller and don’t have venom will be less dangerous.