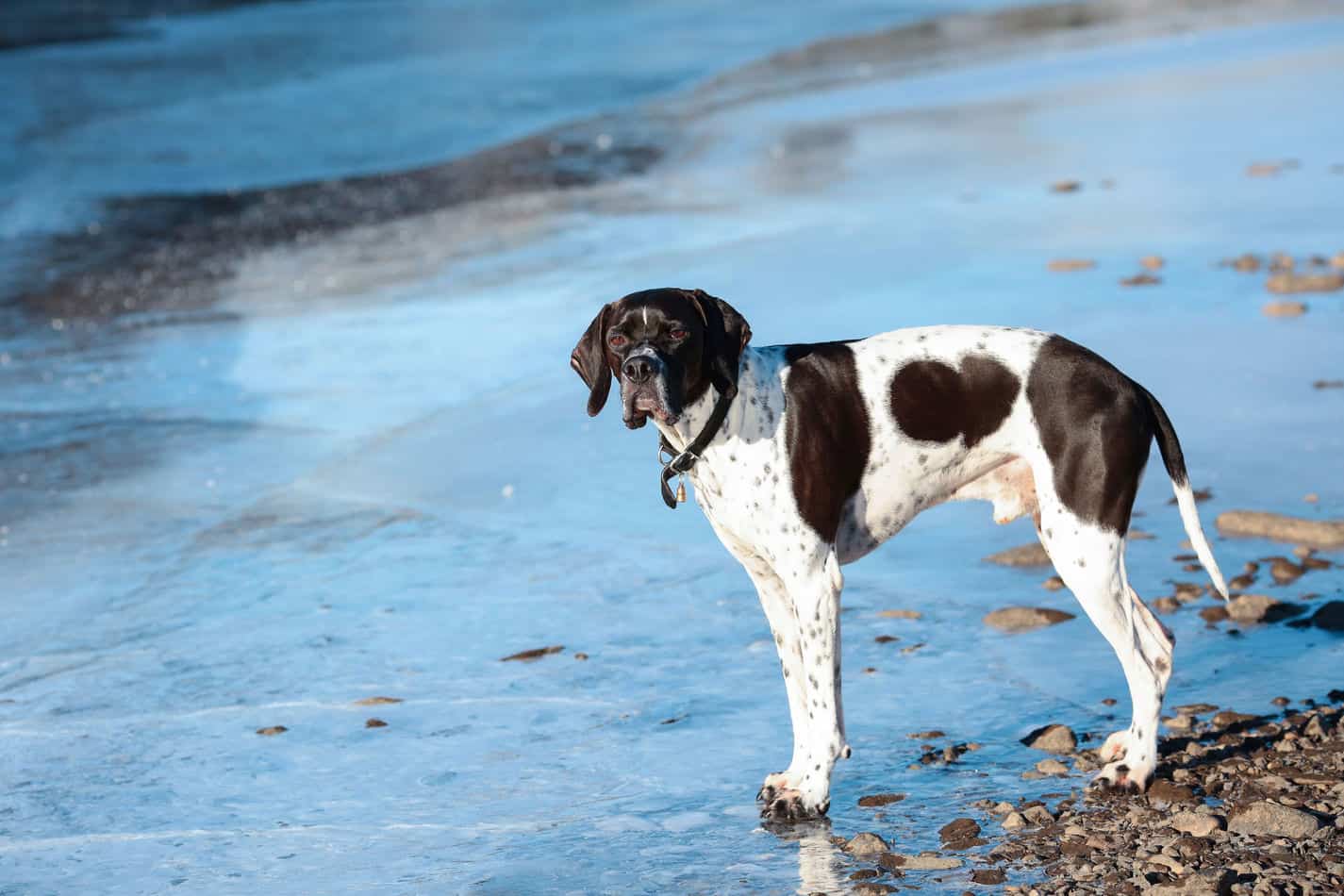 Knowing whether your Pointer has the ability to swim can be important when taking them out. I know not all my dogs were too keen on water, but it depended on their breed and personality. Whether you’re using your pointer to hunt birds or just as fun energetic pets, this knowledge can help you going forward.

Pointers have the physical capability to swim, but the breed itself is not known for its swimming abilities. They are naturally athletic and strong, but individual personalities and experiences can change how willing your pointer is to get in the water.

Just because the breed is not known for swimming doesn’t mean there aren’t ways to familiarize your pointer with the water. There are many ways in which you can test and train your dog to understand if they’re going to be swimmers.

Pointers are very athletic dogs. They are muscled and lean for optimal performance. They have high energy levels and need to be outside for multiple hours a day to keep them healthy and fit.

Swimming can be a great form of exercise for any dog, but some breeds aren’t naturally attracted to the water or the idea of swimming in general. The English Pointer isn’t usually into the idea of swimming, but the German Shorthaired Pointer is better known for their playful nature and occasional affinity for water.

Pointers are a dog breed originally meant to assist in hunting. They are characterized and so named for their ability to “point” a hunter towards the location of prey, mainly birds and rabbits.

As opposed to a retriever, an English Pointer isn’t really used to fetch the kill. They can certainly be trained to do so, but it isn’t their main job.

I mention this because pointers weren’t bred to swim out and retrieve something like a duck that their hunter shot. Swimming has never been a large part of their hunting style.

This being said, pointers have shown to be good swimmers in the past.

They can be trained and are, but it really depends on the individual dog. German Shorthaired Pointers are a more diverse and well-rounded hunting dog in general, so it may be easier to train them to swim and retrieve as compared to the English Pointer.

Every dog has the ability to be trained and taught.

Pointers are definitely a breed that loves to be taught, and they are receptive to disciplined learning. You do have to make allowances for personality and past experiences when teaching a dog how to do anything, though.

One pointer may be willing and ready to learn how to swim; whereas, another may have a natural fear that gets in the way of ever being able to truly perform as you would wish them to.

These two breeds have similar ancestry. They are both hunting dogs made to find prey.

The difference comes in the fact that English Pointers are more geared towards spotting and pointing out the prey. The German Shorthaired Pointer is bred to be a well-rounded hunting dog. They can be trained to point and retrieve.

This distinction is enough that the German Shorthaired Pointer is more likely to like water than the English Pointer. The English Pointer is usually what people are referring to when talking about pointers, but the difference between the two isn’t big enough to cause too much concern on the subject of swimming.

I will talk more on the side of English Pointers just to give a common frame of reference.

One major characteristic of pointers is their athletic build and high levels of energy. These are definitely not dogs used to sedentary or lazy life styles. They are made to be outside, running around, and hunting for hours on end.

They have incredible stamina and that makes them poor choices for small homes or inactive owners. To keep a pointer happy and healthy you will need to play with it, walk it, and let it outside frequently.

Another great form of exercise for many dogs is swimming. The high energy and love of exercise a pointer possesses makes it a good candidate for swimming. Like I mentioned above, they aren’t natural swimmers but it’s not impossible to teach them.

If you have a pointer that you were able to teach how to swim, and they like the water, then swimming can be a great form of exercise for them. However, there are plenty of other ways for your pointer to stay fit if they are against any sort of interaction with a pool.

You never want to force your dog into the water because that can cause a deep aversion to the activity that can’t be forgotten. There are many ways in which you can try to familiarize your pointer to the water at your own home.

Introducing your Pointer to Swimming

Whether your pointer is just a puppy or a fully grown adult there is always a chance to begin the learning process. An older dog may already have preconceived notions about water and swimming, so it may be harder to change their ways and reactions to it.

“Obedience training from a young age is recommended since they can be strong-willed.”

A puppy, on the other hand, may still have reservations but it would be easier to start them early. One of the most important things to remember when trying to teach your dog to swim is making sure they know it’s safe.

This can be achieved by using a life vest, being in the water with them, and bringing familiar things in the water to entice them.

You’ll definitely want to invest in the right sized life vest for your dog if you’re serious about teaching them to swim. You’ll want to put the vest on them, and let them run around for a little bit to get used to the foreign feeling.

Once they’re comfortable with the vest, you can move towards the water. A good way to start is to get into the water yourself. Bring in a few toys and maybe a treat to entice them to pay attention to the lesson.

Pointers love to interact with their humans. They want to be around you and play with you. This can help in the teaching process because you have developed that pet/owner trust. If you’re in the pool, then they may be more inclined to try it out for themselves.

Let them play around the outside while you stay in the pool for a little bit and get them more used to being near the water’s edge. This may take a bit of patience, but it could end up being worth the effort in the end.

If your pool has a shallow step, try putting the puppy on it to make the water more appealing without throwing them in all at once.

Giving a treat, playing with toys, and speaking words of encouragement could go a long way to helping your pointer familiarize itself with being in the water.

Something that I have seen done by trainers is giving the activity a command. Just like you taught your pointer to “sit” and “lay down” using persistence, treats, and praise, you can associate a phrase to swimming. One trainer consistently used the command “go swimming” when teaching his dog to enter the water and paddle around.

It may help them understand what you want from them in the future if you decide you want your pointer to be involved in any sort of water activity.

You can also try turning your average game of fetch into a water activity. Throwing the toy into the pool can allow your dog to discover what it’s like being near the pool and entice them to get in.

Now, this process is definitely not going to be an instantaneous success. Depending on your specific dog, the process may take longer or be an easy transition. Try making these exercises a part of their routine until it feels natural. Don’t be downcast if it’s not successful.

You can always ask for help from outside resources.

“If your dog won’t step off a pool step to start swimming try a pond or lake where they can gradually wade deeper rather than a sudden drop-off.”

It may turn out that your dog is just not going to like the water or be willing to interact with it. Pointers aren’t naturally attracted to it and may always prefer to stay on land. It’s just going to depend on your pointer’s personality.