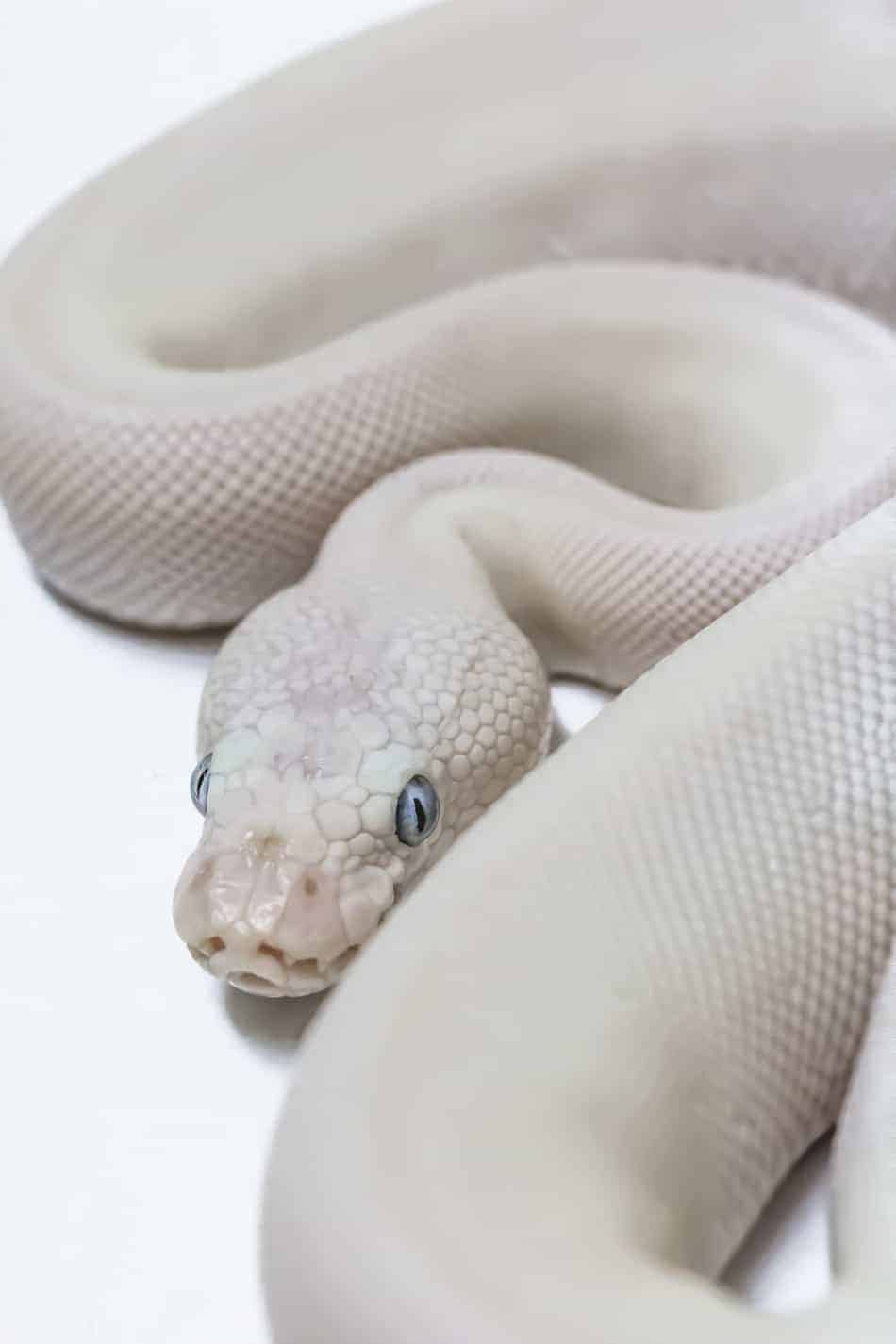 The Blue Eyed Leucistic ball python is an incredible looking snake. Often called a BEL python, this snake is completely pale/white. It has crisp blue eyes and a very unique combination of genes from several different snakes.

So, what is a BEL ball python? A BEL python is a morph. It occurs rarely in the wild but has been recreated by breeders for years now.  Its exotic look is an attraction for many a breeder and is quite difficult to produce. It is not a guarantee that it will be produced within the first time breeding the two snakes that will make it. This specific kind of ball python morph is rare and it is expensive.

If you have never heard of it, or you want to know more, this is the perfect place to start. There are many things that make this ball python unique and special. Knowing where it came from and how it can be recreated will open your eyes to a whole new world of fun!

The BEL python is very rare in the natural world, but snake breeders have learned how to create them on their own. Their endeavors make this normally unique and rare creature not so rare as before, but just as cool.

The BEL is still a beautiful reptile with as much potential to become someone’s pet as any other python. The BEL is a combination of two of four different types of ball pythons.

All these unique pythons have their own original color and texture. While they are all different, they are all still ball pythons. Like people, we come in all shapes, colors and sizes, but we are still people. Our outsides look different, but ours insides are all the same.

Leucism (also spelled Leukism)  is very similar to Albinism, but they aren’t the same. In Leucism, you are losing several different types of pigmentation instead of just melanin.

Unlike albinism, the eyes will be completely normal and virtually unaffected. A ball python will retain their natural eye color because the snake isn’t lacking in melanin.

You can’t just breed any two snakes together and hope they will turn out to be leucistic. There are five specific snakes which are commonly used to get the desired BEL python result.

All five possess the genetic makeup to create the white skin and blue eyes. Although, there are some combinations which are surer than others. Here is a complete list of which ones they are and their coloring. This will give you an idea of what they contribute to the BEL mutation.

These are the only five that will create a BEL. Don’t waste your money on other snakes in an effort to create a BEL because you will fail. Sorry, but you will. You may only have an interest in these if you are planning on doing some breeding.

How Much Does it Usually Cost to Buy a BEL Python? What About to Breed It?

Most pythons can range from about fifty dollars to six hundred dollars. It’s all about what kind you are looking for. If you are contemplating buying or breeding a BEL, your prices are going to vary quite a bit.

I would advise researching the best terrariums, food, heat lamps, and bedding for BEL before you go out and purchase. It doesn’t make any sense to spend a bunch of money on a snake that dies because you didn’t do the right research for its health.

Your snake’s health is crucially important, and getting the right equipment and resources will ensure that health. Be sure to get the best quality. You’ll regret getting cheaper things for a lesser quality. It’s never worth it to choose a lower price over  quality.

Below are some tables of estimated expenses you might have to cover to get your BEL ball python.

Note: This is a very broad estimate made to help readers get a feel for how much it would cost to get a Ball python.

It all depends on if you are planning on breeding your snake or just buying. My guess is the cheapest option would be to just buy the BEL. If you are a breeder, this table may not help that much.

If you are thinking of becoming a breeder, this table will help you get a feel for how much it costs to merely own these snakes. It doesn’t account for the time or effort that goes into breeding.  How to breed these snakes is another matter entirely and could be put into several posts of its own.

What Is a Morph?

A morph (properly called heterozygous) is a snake that is of a specific species but doesn’t completely look like its own species.

A BEL ball python is the combination of two “morph” snakes. Morphing takes a regular colored and beautiful snake and can create all types of different colors and pigmentations that haven’t yet been seen. It is super awesome and I didn’t even know it was a thing until I chose to write this post.

Morphing doesn’t just occur within the ball python species. You can have all kinds of morphing happening within anacondas, kingsnakes, rattlesnakes, and pretty much any other snake breed you can think of. Morphing can happen naturally, or a breeder can make it happen (as mentioned earlier).

If you are a breeder, you are probably familiar with snakes and their mating patterns, and the different types of results you can get while breeding two snakes of the same species. However, have you ever tried breeding morphed snakes? My question will probably only get the wheels turning of the truly passionate and adventurous breeders.

Hopefully, this section has opened your mind to the many possible outcomes that nature and man can come up with when they try.

We have a great article about Everything you need to know about snake morphs that you can read on out site.

Are BEL Pythons Sensitive to Light?

When albinistic creatures are exposed to light, they are generally going to be sensitive because of their lack of melanin. This is not the case with BEL ball pythons. Like all other pythons, they are not sensitive to light.

Ball pythons are nocturnal, as BEL’s are a type of ball python, they are also nocturnal. You can treat your BEL the same way you would treat a regular Ball python. (Only the BEL is much cooler!) Ball pythons like small, dark, and cool places, and so does the BEL python.

What Causes Genetic Mutations To Happen in the Wild?

For instance, during incubation there can be a change in temperature that cause damage or injury to the shell. Another factor could be evolution. A snake can adapt slowly through time and become something different entirely.

Morphing in the wild is very rare.

We see physical evidence of certain snakes having had legs in the past. They are of no use to the animal now, but they are there. Some snakes even have hip bones but nothing to attach to that area.

Just like in humans and other animals, genetic mutations happen. There are varying circumstances that can cause these things to happen. They are, however, not natural, so it is very rare to find genetic mutations in the wild. This is why it is such a novelty to discover such a thing if you happen to.

How Many Different Types of Morphs Are There?

There are 26 different types of morphs for a ball python. This is only a list of the Ball python morphs, but other snakes have morphs too. There are also many different kinds of pythons. This is not a complete list of the entire species. Each snake has its own unique pigmentation.

Here is a complete list of morphed Ball pythons:

Each one of these morphs has a unique coloring and texture and yet they are all ball pythons. If you are still curious and would like to know more about morphs, below is a link.

you can find a great article about ball python morphs.

Why Is it Called the BEL Ball Python?

Well, it’s called a BEL because of its leucism and blue eyes. The B.E.L. stands for Blue Eyed Leucistic.  The BEL ball python is grouped up with Ball because of its origin and its characteristics that are unique to ball pythons.

In the United States, they are called Ball Pythons because they curl themselves up into a little ball when they are nervous or scared. In other countries, they are actually called the ‘Royal’ python.

In the famous Things Fall Apart, a ball python is killed by one of the and the natives believe this man to be cursed because the ball python is a sacred animal; a royal one.

Who Found The First Morph/Heterozygous Python?

Where did morphs come from? Who started it? How did we get from regular pythons to such an exotic and beautiful morph as a Blue Eyed Leucistic Ball python? Well, for a long time Ball pythons weren’t much thought of as anything special. They are gorgeous, but they are also very common.

As we all know, anything that is commonplace tends to lose its wonder for many of us that are a part of the human race. That being said, this lack of luster for the Ball Python wasn’t lost for everyone.

Some people knew these creatures still held a great deal of value for the world. One of the first morph breeders with this starry dream was a man by the name of Bob Clark.

Clark took an interest in an albino snake he saw in a picture taken in Africa. He was in wonder at its unique color and texture. He only admired it from a distance at first, until he later saw it for sale online and decided he had to get a closer look.

Desperate to make more albino snakes, he made a deal with the owner to breed it and his offer was accepted. Clark started out from small beginnings and was successful. You can find his bio here on his website.

The BEL python is by far one of the most popular and most unique of all of them. They sell for quite a pretty penny. You’re lucky if you get one under six or seven hundred dollars. And it’s all thanks to Clark.

If you are a blue-eyed leucistic ball python snake fan, I thought you might like this t-shirt

to show off your snake!

What does an albino Ball python look like? You may not know it, but an albino ball python isn’t actually all white like you’d imagine. It’s got a beautiful pattern made of white and yellow. 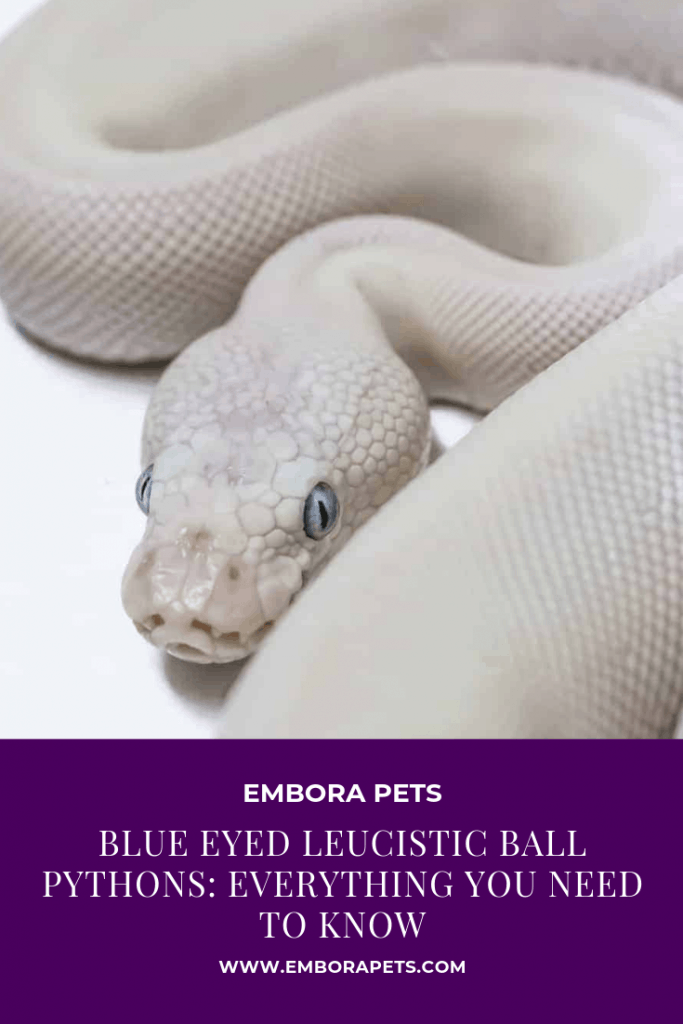 Where do Ball pythons come from? The Ball python (or Royal python) originated in the sub-Saharan part of Africa. It is the smallest of its species.