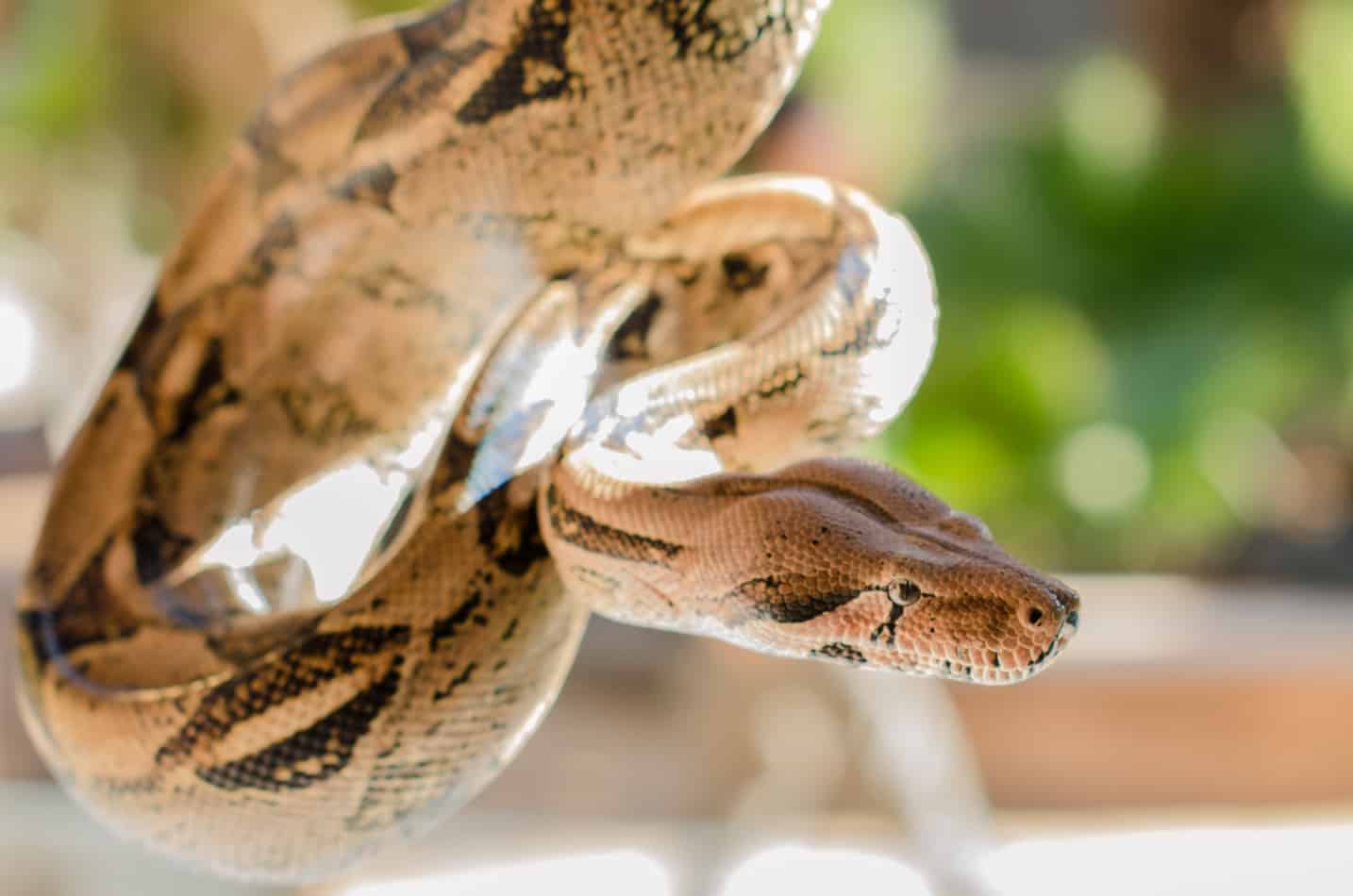 Boa Constrictors are a pretty intimidating reptile and people often think they are poisonous. They are very elegant and beautiful snakes, but because of their size, it is easy to think that one bite from a Boa Constrictor would kill you, but actually, it won’t.

Boa Constrictors are an exotic and exciting reptile with many interesting attributes. There are so many things about them I didn’t know before. I remember one time in elementary school when they brought a Boa to our assembly. I was fascinated by its length and size. It’s color and texture was so sharp and smooth at the same time.

No, Boa Constrictors are not generally aggressive. They are even kept as pets in some places. However, they do get aggressive when they shed their skin or if they are agitated.

Like all snakes who shed their skin, Boas lose their eyesight for a while. A Boa’s main source of sense and sight is in their eyes- they have excellent eyesight. It could be very frustrating to lose your main source of sight and sense and have people touching you all the time.

People generally leave them alone during this time because they are more agitated. They are solitary animals which means they like to be alone.

Although they are not aggressive, they are not the ideal pet to have around children. Children are small enough that they could be seriously injured or suffocated by a Boa by accident.

Also, because they are so big, their bite can be pretty nasty even without being venomous. If you have children and are thinking of a Boa Constrictor as a pet, keep walking, this reptile is not the one. (They are awesome though.)

Have you ever heard that song “I’m Being Swallowed by a Boa Constrictor”? If you haven’t, go listen, it’s pretty entertaining. It is a song about a human being eaten slowly by a Boa. I learned this song when I was in elementary school by my music teacher- who was also my neighbor- and it freaked me out. I’d actually forgotten about it until now.

Will a Boa Constrictor eat you? It’s not very likely that you will be slowly eaten by a giant Boa constrictor. A Boa can harm you if you are not careful, but not intentionally.

It might hold too tight when you are holding it and give you some bruising. Or, it could bite you if you are one of those people who mess with agitated animals, but other than that a Boa won’t intentionally cause you harm.

Note: Do not approach a wild Boa Constrictor in the Amazon just because I told you that they are not aggressive.

Boa Constrictors can kill humans, and they can be dangerous in the wild even though they are non-aggressive. Even then, they probably wouldn’t even take an interest in hurting you.

A Boa Constrictor can open its mouth to about 4-5 times bigger than their head, but they do not dislocate their jaw.

They also do not have the capacity to eat a human whole. In researching about these snakes I have discovered that the Boa Constrictor song is completely inaccurate and false. It was a bittersweet discovery. Wouldn’t that be so crazy if it could swallow someone whole?

The song is also inaccurate because it says that the Boa is eating the human from toe to head, but snakes eat their victims from head to toe. Sheesh! (Pythons, on the other hand, are the constrictors you need to worry about eating you.)

A Boa’s jaw has very elastic skin which allows it to stretch to an alarming size. You have probably been told that snakes dislocate their jaw so that they can fit all of their prey into their mouth. After watching several videos and doing lots of research, I discovered that that wasn’t true.

A Boa Constrictor can open its mouth to about 4-5 times bigger than their head, but they do not dislocate their jaw. It’s was just the actual measurements can’t be given because not all Boa Constrictors are the same size.

When they eat, Boas eat their prey head first, and they walk up with the top of their mouth, and they slip their bottom half down underneath to get a good grip. Then, they swallow their prey whole.

How Big Are Boa Constrictors?

Boa Constrictors are one of the largest snakes in the world. It ranks up with Pythons and the Anaconda (Which is a type of Boa.) Boa Constrictors start out at about 2 feet long and can grow up to 14 feet in length.

They grow really fast, so be wary of that if you are going to keep one as a pet. The biggest Boa Constrictor is about 18 feet long. (Female Boas are generally larger in length than the male boas.)

An adult female Boa can weigh about 22-33 lbs. When they are pregnant they weigh even more than that. Most adult male constrictors top out their weight at about 30 pounds and don’t get much heavier.

A red tail boa can get up to 50 lbs. It just depends on what type of Boa Constrictor we’re talking about. Boas can be large and small, but being one of the largest in the world makes their small not so small.

Where do Boas originate? Boas are mainly found in Central and South America. This is their natural tropical habitat. They enjoy living in trees and abandoned burrows.

Do Boa Constrictors Make Good Pets? Boas are very awesome pets, but they are not safe pets to have with children. If you don’t have children, do some research and get one. They are super cool.

The Bichon Frise is certainly cute, but is it cuddly as well? You will probably be glad to know that this breed does tend to be very cuddly, especially if you provide the right training throughout...

Continue Reading
link to When Does a Bichon Frise’s Hair go Curly?

A Bichon Frise is a charming little dog with a snow-white coat that is incredibly fluffy. Paired with the large, dark eyes, the fluffy, curly coat is an absolute showstopper. If you've been wondering...