Here’s my question: Do reticulated pythons have a temperament to match their strength? They are known as non-venomous constrictors, so they can’t easily kill anything with their bite, but they can easily constrict and swallow an entire human being in just under an hour.

If a reticulated python is so powerful and docile, you might what to pick it up. How would you do that? What if you encounter one in the wild? you keep one as a pet? Keeping reading to find out.

How Should I Handle a Reticulated Python?

Captive-bred pythons are the safest snakes to interact with, as they’re less likely to view you as prey. Because they generally live on a uniform diet, they understand what food is and what it isn’t. But there are still certain tricks to handling even a “domesticated” reticulated python.

The first and foremost key is to ensure that the snake won’t feel threated by any factor of its environment. Reticulated pythons are very habitual creatures. They thrive on consistent, routine interaction. They’re highly unlikely to act out when in a constant environment full of familiar people.

Upon the first meeting, a reticulated python will probably view you as a threat, so it’s best to avoid physical contact until you’ve spent time with the snake and established some sort of secure relationship.

Always avoid actions that could cause your snake to lose trust in you. Rough handling, of course, will scare the snake into biting or otherwise harming you in defense. Grabbing its lower body or neck can also engender mistrust. (If picking up a reticulated python, keep your hands on the upper third of its body and away from its head.)

Keep the snake’s face away from your own, as the human face is a vascular area. Its heat signature may seem a perfect target for a nervous reticulated python to bite.

It is usually unwise to come into contact with a sleeping or freshly-awoken reticulated python. Like any species of snake, pythons live in modes of sleeping, thinking, and eating. The eating mode is especially interesting: In the wild, reticulated pythons lie still for extended periods of time, awaiting prey in the grass or on the side of a game trail.

To save the energy of staying awake for the entirety of their hunt, these snakes have a “hair trigger” that responds to any kind of movement and stirs them from their sleep.

If you suddenly awake a sleeping reticulated python, or if you interact with it shortly after it wakes up, you might catch it in its “eating” mode. If it mistakes you as a passing animal, the snake could coil itself around you and prepare to feed.

Watch a python for certain signals that might indicate stress or fear. A skittish reticulated python is probably agitated, and you might want to keep a safe distance until it calms down.

If a snake hangs its tongue out or exhibits jerky movements it is probably nervous, and, once, again, you’ll want to stay away. If you must approach a defensive reticulated python, always wear gloves and, if possible, acquire a snake hook to turn its head away from any exposed body parts.

When dealing with any large snakes, even domesticated or “tame” ones, it is always wise to have someone with an understanding of the species present. You can always brush up on your python facts on the internet, but no amount of web-searching can compare to the knowledge of an expert.

Can I Own a Reticulated Python as a Pet?

You’ll have to consult the specific laws of your state, province, or country to determine what license you need to own a reticulated python, but with a proper permit, you can usually keep these snakes as pets. Before purchasing one, however, I strongly recommend learning all you can about reticulated python habits and care.

Before buying a reticulated python, you’ll need to acquire a safe and sizeable terrarium. Reticulated pythons typically require a floor space of at least four to eight feet (sometimes more, depending on length and weight). Remember that these pythons are incredibly strong. You’ll want to find a sturdy enough tank to ensure that your snake won’t break the glass and escape.

Make sure that your snake’s enclosure is comfortable. You’ll need to line the floor with newspapers, aspen, cypress mulch, or pre-cut corrugated cardboard to ensure that your pet won’t be injured while moving around in its tank.

Reticulated pythons (and most other snakes) need some sort of “hiding spot” in their terrarium—someplace dark and cozy to sleep or relax in. A small box or a large pile of rocks should be just fine.

It is also suggested that you buy your snake from a reputable breeder. Reticulated python behavior is largely hereditary. If a breeder has a history of calm and gentle snakes, the odds of your new pet being at all violent are low. Furthermore, a well-bred python will be healthy (wild or malnourished snakes tend to have parasites) and already accustomed, even inclined, to a captive life.

Before you purchase a reticulated python, make sure that you’re fully equipped to care for it properly. A neglected, malnourished, or otherwise unhealthy snake is far more dangerous than a happy one. Study a reticulated python’s eating and living habits so your new pet can thrive in the best environment possible. Reticulated pythons are only dangerous when provoked. Always treat your python with respect. Good luck!

Are Reticulated Pythons Safe to Encounter in the W?

Native to Southeast Asia, not only are these the world’s largest snakes, but they actually dominate all reptiles in terms of length, and they’re among the three heaviest snake species in existence. Wild reticulated pythons are very different animals than their domesticated counterparts.

They are conditioned by nature to consider any heat-omitting organism as either prey or a threat to their safety. There are a shocking number of accounts of reticulated pythons being discovered digesting human remains.

Just recently, an Indonesian woman was swallowed by a reticulated python in her own vegetable garden.

(you can read the article on BBC.com)

Last year, a man’s fully-intact body was cut out from the belly of a python on the island of West Sulawesi. The snake weighe 158 kilograms—almost four times the size of its victim. You can read about it here, but let me warn you: It’s very graphic.

Reticulated pythons have strong enough powers of constriction to asphyxiate prey much larger than themselves, and they have the chilling ability to detach their jaws and gulp down deer, pigs, and people alike. Long story short, a reticulated python in the wild will not distinguish between you and any other animal, and it’s best to steer clear.

Is a reticulated python’s bite at all dangerous? A non-venomous python bite hardly even draws blood. A reticulated python’s teeth are so small and thin that they might not even leave a scar. However, unless the snake chooses to detach itself, the fangs will be very difficult to disconnect from flesh. They are curved toward the back of the python’s mouth and might leave deep gashes if forcefully removed. 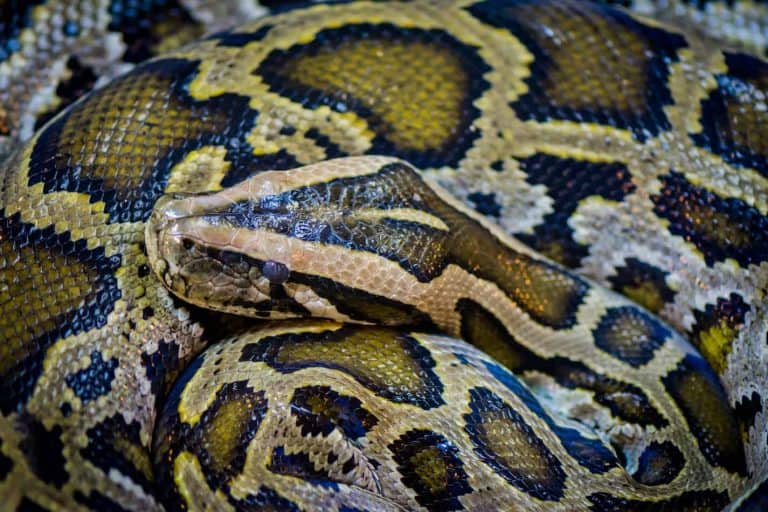 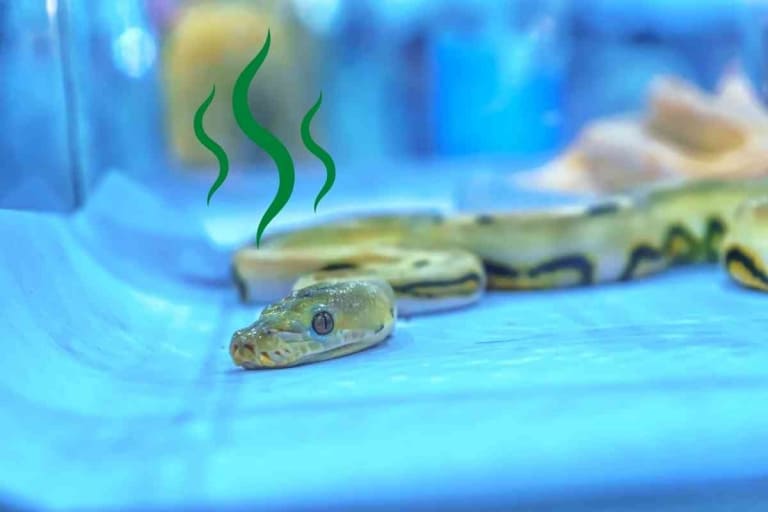 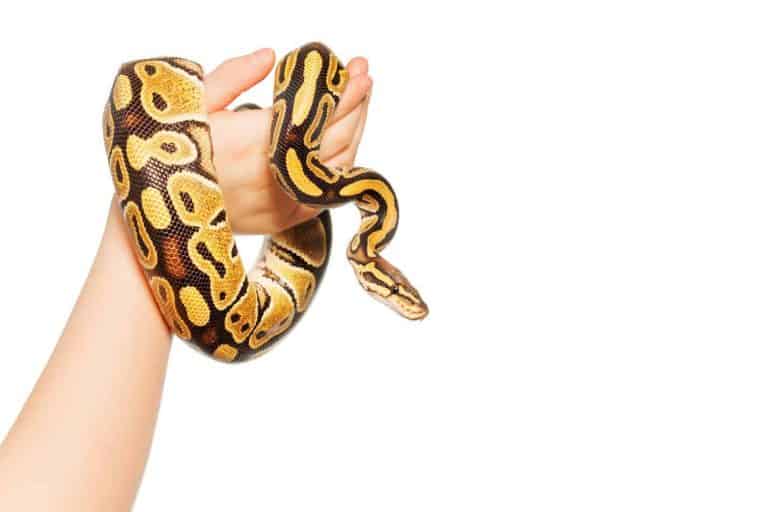 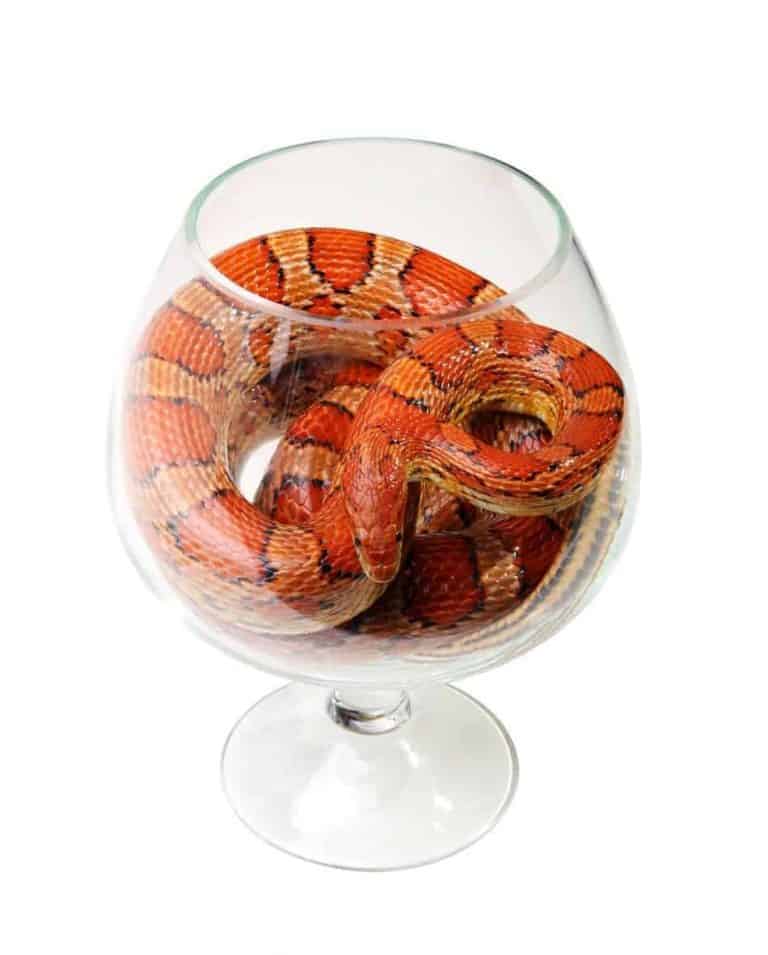 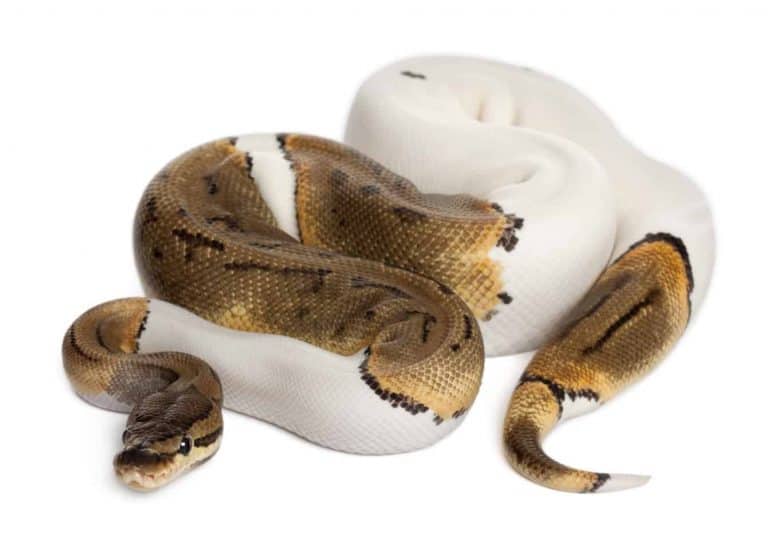