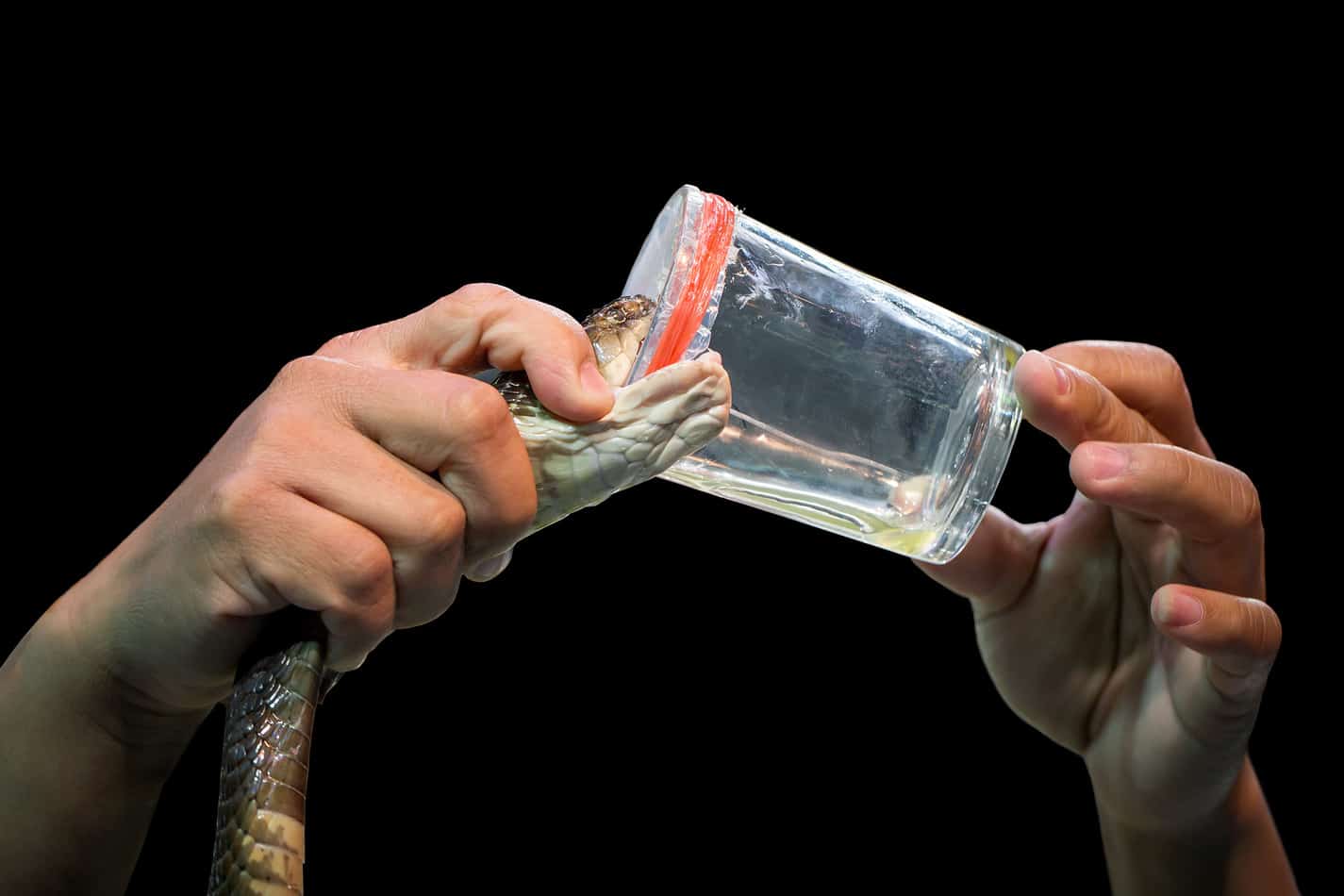 Holding a venomous snake is something I never hope to do, but we all need a little excitement from time to time.  There are those who truly enjoy putting their very lives in danger, and what better way to do that than to get your hands on a writhing, angry, poisonous lasso with fangs? In reality, you may find a time where this certain skill set will come in handy, or it may just be something interesting to tell at your next party.

How do you hold a venomous snake? Wear gloves and never handle one alone. Venomous snakes are typically stronger than other snakes, so you will want multiple hands helping you. Snake tongs and hooks are helpful in the process. You need to pick up the snake in its middle to avoid hurting it.

Some people ride roller coasters. Others jump out of airplanes for the adrenaline rush. I personally find plenty of thrill in a good Stephen King book. These are all, however, simulated perils. I know your concerns probably extend far beyond sheer amusement. This article is simply a reference for curious web-searchers. If you’re planning on spending some tactile time with a venomous snake, consult with a verified snake expert first. Better yet, invite the expert to join you in your parlous adventure.

I know you’re all dying to read more of my facetious prose. Regardless—and much to your dismay, I’m sure—this article is about to get real serious. There’s no sense in playing around with deadly reptiles. Due to the potentially lethal implications of handling venomous snakes, I’m going to rely heavily on the words of seasoned professionals and snake specialists.

If you plan to hold a poisonous snake sometime in the near future, understanding the following details will be absolutely vital to your safety:

Don’t ever approach a venomous snake without adequate knowledge of and precautions against its behavior.

There are also certain rules of conduct that you’ll need to adhere to if you truly want to evade a toxic snake bite.

In an interview with The New York Times Magazine, Jim Harrison, professional venom extractor and snake-whisperer extraordinaire, exposes the finer tips and tricks of snake-holding:

“Don’t pick up a snake with your hands.”

“You have to know that you’re human and things can go wrong.’’

Harrison recommends an “empty mind,” as “following your thoughts will dull your attentiveness.” He also offers a profound warning to squeamish readers: “The snake will defecate on you.” (In other words: Keep some hand sanitizer nearby.)

Home to more than one hundred species of venomous snakes, Australia is more equipped to dole snake-related words of wisdom than any other country or continent on the planet.

The Australian government has some further guidance for all those who intend to handle these reptiles (some of these points may be similar to what I’ve already said, but, considering the grave risk of holding venomous snakes, it really can’t hurt you to read it again):

“You must handle snakes correctly to reduce the chance of injury to you and the snake.

Clean your hands before handling snakes, especially if you have been holding food such as mice.

Consider all of the following below before handling a venomous snake:

to view the article or for information regarding feeding, housing, and transporting venomous snakes.)

In nature, I recommend avoiding snakes altogether, if possible. Under no circumstances should you ever pick one up, even if you’re pretty sure it’s not venomous.

Wild snakes aren’t so comfortable around humans as their domesticated counterparts. But if you happen to step in a snake hole—or, worse, an entire serpentine urban complex (my recurring nightmare)—the best thing you can do is stay cool and walk away.

Snakes aren’t generally hostile creatures; they’re merely defensive of their environment. If you remain calm, the snake will sense no threat, and you’re unlikely to be bitten.

What if My Home is Infested?

If you’re one of those poor souls handling venomous snakes against your will, the smart thing to do is, of course, call an exterminator. Having said that, there are some steps to take for your own well-being until Pest Control can resolve the issue professionally.

These are just a few interesting facts about snake bites and venom:

Seven to eight thousand people in the United States are bitten by venomous snakes each year. While U.S. citizens typically have easy access to om (more commonly known as antivenom), victims in other parts of the world are not always so lucky.

Don’t become a statistic. You’ve heard this trope before, I’m sure, but clichés are cliché for a reason. Safety should always be foremost on your list of priorities—way above holding a snake.

Where can I go to hold a snake? If you’re interested in holding a snake, your local pet store should allow you to do so with the proper supervision. Whatever snake you hold probably won’t be venomous, but it’ll still be a cool experience. Keep updated on events in your area. There might be a reptile show or sale nearby, during which you’ll be able to hold all the creepy crawlers you could possibly dream of. For more information, consult this Reptile Events Calendar

(I can’t believe it exists, either).

Can I catch a venomous snake? I don’t suggest pursuing any wild snake—especially not a venomous one. However, there are some experienced snake hunters out there (emphasis on the word “experienced”). You shouldn’t hunt any dangerous animal without the proper training, but if you’re eager to learn about snake-catching as a profession, feel free to surf through snake-removal.com

. (This website also contains plenty of information about safety in the instance of a snake infestation, if you’d like to read more about that.)

What do venom harvesters do? You may recall Jim Harrison, this article’s guest of honor, so to speak. As a venom harvester, or “snake milker,” Harrison extracts the venom from snakes’ teeth to create antivenin for deadly snake bites. If you’re going to hold a venomous snake, it’s always wise to keep some of this antivenin on hand.