How many times a year do corn snakes lay eggs? Female corn snakes will typically have one to two clutches of eggs in a year. A clutch is typically about 12 eggs, but females in their prime could have 34 eggs or more in one clutch.

While it is important to know how often a corn snake will lay eggs and how many eggs there could be, a lot of factors, like seasons and temperature, will affect the breeding process. There is a lot more to consider than numbers.

Like many other animals, corn snakes base their mating schedule around the seasons. While snakes in captivity may or may not follow these patterns the same as snakes in the wild, the seasons can play a role in successful breeding. Because the mating schedule goes around the seasons, corn snakes will typically only have one clutch of eggs each year. However, younger snakes may be able to have a second clutch very quickly after the first clutch. The second clutch can be really difficult on the female’s body, so it may not be recommended to try for a second clutch in the same year.

Corn snakes are capable of mating quite young. Though females could lay eggs within their first year, the clutches are likely to be very small, probably somewhere between 2-6 eggs. Age has a lot of bearing on the size of a clutch, or group of eggs, and as the female ages, she will be able to bear more and more eggs.

A female is ready to mate when she is ovulating. This may not be obvious at first, but the more you see a female at her time of ovulation, the easier it will be to spot it. The female will look a bit like she is bulging or well-fed, but the bulge will be softer to the touch. Once the female is ready to mate, the male will be too. All he needs is the pheromones from the female snake to alert him that a fertile female is nearby.

After the mating process, the female will become pregnant. The female is pregnant for about a month, and the eggs are ready to hatch after a month or two. The number of eggs can vary extremely, so be prepared for a lot of eggs, just in case. This is especially important if the female is in her reproductive prime.

We wrote an article all about how to breed corn snakes correctly and successfully. Click here to read it.

Ideally, corn snake breeding should be based around the seasons that are typical for mating in the wild. Though mating can happen anytime in the year, the best results will come from following natural patterns.

Mating occurs best in cool seasons (60 degrees Fahrenheit or cooler). Many breeders will keep the snakes in dark rooms in the days leading up to the mating to help simulate the feeling of winter for the snakes. This helps them to treat the darkness as a time to hibernate. Corn snakes will typically mate in the spring, so helping them feel like they have a winter, or simulating a winter, will encourage the snakes to want to mate after the winter passes.

During the winter phase, make sure to slowly decrease their food so that they don’t have undigested food sitting in their stomach as they hibernate. Undigested food could make the snake very sick or even cause death. The snake will still need water available during hibernation, so make sure to supply them with enough clean water.

As spring, or the spring you simulate, begins, gradually increasing the amount of light and heat the snake has each day will help it recognize that winter is over. Spring, and mating, can begin. It is important to make sure that your males and females are on the same schedule seasonally so they are more prepared to mate when the time comes.

After a snake hibernates, it will likely shed its skin. When this happens, it is a good time to begin the mating process. Once you have checked that the female is ovulating and fertile, she can be placed with the male.

The male relies on pheromones to inform him that it is time for breeding. Placing him with the female should be enough to let him know that another snake is near him and that it is a fertile female. This signals to the male that it is time to attempt to reproduce.

The male will try to align his body beside the female. If he succeeds, the two snakes will intertwine their tails, allowing them to mate with each other. Typically, the snakes will remain in this position for up to about 20 minutes. After mating, the male and female are usually separated again.

The female should become pregnant after mating. She will most likely be pregnant for a little over a month and will lay her eggs after that point. Make a nesting place for the female with moss, warmth, and dampness to give her a safe and comfortable place to lay the eggs. After the female lays the eggs, you will have to take care of them for her, but for the birthing, she will need a safe place to nest.

This link is another good resource for more information on breeding and mating.

What do You do with the Eggs?

So now that your snakes have mated and the female has laid her eggs, your work is just beginning. In the wild, snakes will find a place to lay their eggs that has the right warmth and humidity. If the female chooses the location poorly, the eggs don’t hatch.

Because your snakes are in captivity, the female doesn’t have a lot of places to lay her eggs. That leaves their survival up to you, the owner. The eggs need warmth and humidity, so keeping them in an incubator is the best bet.

Incubators can be homemade or purchased, but either way, the incubator needs to be able to maintain good levels of warmth and humidity. Try to keep the temperature in the incubator in the between 80-90 degrees Fahrenheit. It is probably preferable to keep the temperature below 90, but if it is at 90 degrees, don’t let the temperature higher or it could damage the eggs. Heating coils are ideal for heating the incubator, but heating pads should be avoided to prevent fires. Make sure that no egg sits on a hot spot, as this could kill the fetus. The eggs should stay in the same place and position as much as possible during the incubation period. This will help the fetus to develop correctly.

It is also important to include a substrate of some sort in the incubator. I have seen sphagnum moss recommended as a substrate because it can be damp and is non-toxic to the eggs.

Plan on keeping and caring for the eggs for about two months. Keep careful watch on the conditions in the incubator so you don’t lose your clutch.

For more details about incubation, check out this link.

Can a corn snake lay eggs without mating? Occasionally, a female will lay eggs without having had a mate. These eggs (called slugs), lain without a mate, are infertile and will not hatch because there is no fetus in the egg. A female can only lay fertile eggs if she has mated with a male.

How long does it take for corn snake eggs to hatch? Corn snake eggs will hatch between 58-62 days after the female lays them. The baby snakes may remain in the eggs for a few days after hatching to soak in more nutrients. 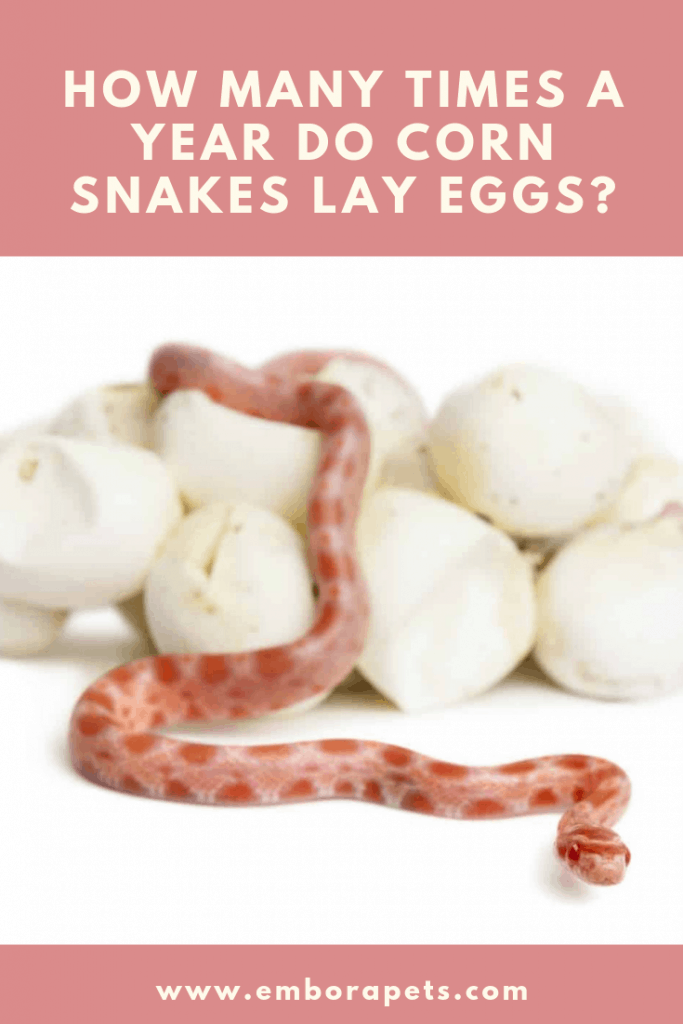 How long are baby corn snakes? Baby corn snakes are usually around 8 to 10 inches long once they hatch from their eggs, and are fully formed and able to eat their first meal of tiny pre-killed mice.