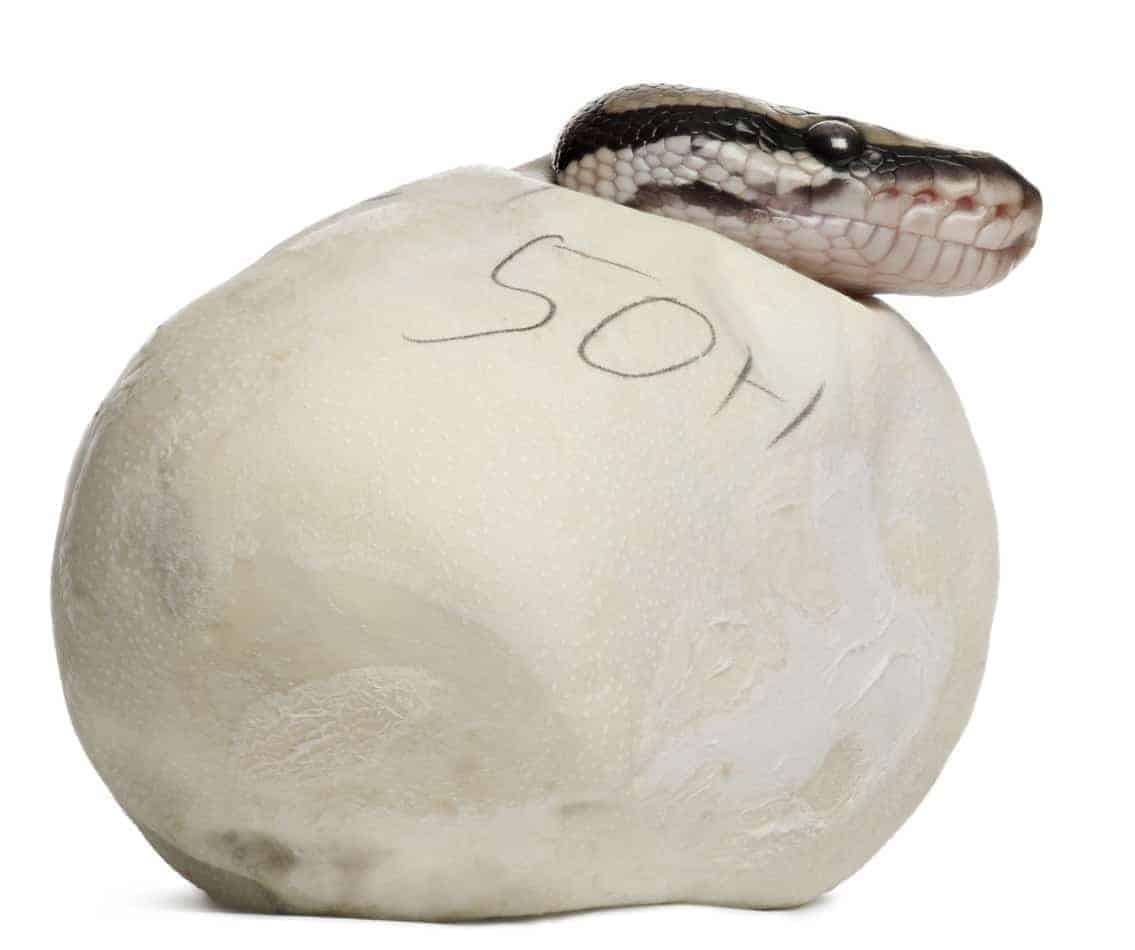 A friend of mine was looking into getting a ball python and he wondered how many eggs they lay and how many hatchling snakes come from those eggs. I was curious myself and started looking into the matter.

How many eggs do ball pythons lay, and how many survive? Ball pythons lay 3 to 11 eggs in a clutch. With an average of 6 eggs laid per clutch. All of which, providing there are no extraneous circumstances, will survive to hatch.

Ball pythons lay a large clutch of eggs. Their average of six eggs is impressive on its own, but the survival of all those eggs is really impressive for snakes. This is generally due to the protective nature of mother ball pythons as they will protect their young until they are hatched. This nature of ball pythons and their concern for their eggs does raise some questions though. All of these questions and more will be answered down below.

The Behavior of a Mother Ball Python

Ball pythons whether male or female are rather docile creatures which is where the biggest and most obvious change occurs in a mother ball python. They will vehemently protect their own, even going on the offensive to what they suspect is a threat to their young.

Ball python receives their name from their natural defense mechanism to coil their bodies and place their head somewhere near the center of this ball. Mother ball pythons take this defense a step further as they have coiled themselves around their eggs to protect them and herself.

The process of incubation takes anywhere from 80 to 105 days. During this time the mother is generally wrapped around her eggs, keeping them safe. The mother will even forego food and throw off her feeding schedule to protect her eggs through the incubation process.

Unlike chickens, snakes do not produce eggs frequently. Chickens will produce an egg consistently without concern, whether that egg was fertilized or not. Snakes are not this way; they generally will only produce eggs to reproduce and as such produce eggs after they have spent time mating and fertilizing the eggs. There are some exceptions to this, but both are seen as rare.

Slugs: Slugs are the term used to refer to eggs that a female snake lays that have not been fertilized.

This is a very rare occurrence. It is similar to what a chicken does with its fertilized egg; it is not unhealthy for the snake but it is incredibly rare.

Virgin Births: It is possible for a female ball python to produce offspring without mating. These virgin births are very rare, more so than the production of slugs, and occur only if your snake has a certain amount of genes.

This process is scientifically known as parthenogenesis and has been seen in ball pythons, bearded dragons, Burmese pythons, and even Komodo dragons. However, it is possible for a female ball python to hold on to the sperm of a previous mate, as such this process isn’t a virgin birth; rather, a later pregnancy than is expected of the general pairing of two ball pythons.

Female ball pythons can hold onto the sperm of male pythons they have previously mated with for years so this process is often confused for virgin births but not.

What is the Optimal Incubation Environment for Ball Python Eggs?

The needs of ball python eggs fall into two categories: temperature and humidity.

One of the ways that ball pythons do this is through basking until they are really warm and then wrapping themselves around their eggs. Other species of python are known to vibrate to warm themselves and their eggs.

To model the environment of a mother python wrapping herself around her eggs, you will want to keep eggs at a temperature of 80-85 degrees at least. Allow the mother python to have warmer spots to move around to so that she can warm herself up to wrap around her eggs for extra warmth.

humidity needs to be high for the snake eggs to hatch. We are talking 65% humidity if not higher. You may want to look into getting humidifiers or other like devices for your ball python’s cage if you are not able to reach those humidities with the setup you have now.

The Hatching and Early Life of Ball Pythons

After the 80 to 105 five day process of incubation, the mother python leaves her eggs behind and moves on to her normal life. To learn more about other snakes and how long their eggs usually take to hatch, read this article we recently wrote.

This leaves the ball python hatchlings to fend for themselves and it’s not easy for them, nor is it easy for you as the owner to take care of these young ones.

There are two ways to do this: warmth and movement.

Ball pythons, like several other snakes, are attracted to heat so the heat of their prey will attract them. To do this, you will want to place the frozen mouse in a plastic bag and float the rat in some warm water.

By doing this the mouse will look warm without being too warm for your baby snakes to handle. Do not microwave your rats this can hurt your snake. Especially given the snake’s young age, you don’t want to feed them anything too hot or too cold as both will harm the creature.

The other way to get a young snake’s attention is movement. When a mouse is moving than it has to be alive right? Well, that’s what you want your snake to think anyway. So take a long stick or long tongs and move their food around a bit hopefully this will help them out as they attempt to start to learn to find food on their own.

If neither of these tricks helped then wait for a little it may just be too early for these snakes to start eating it may take a few days before they are ready to start eating.

What weight is needed for breeding? Weight or size of a ball python is much more important than age in regard to its breeding capabilities. For male ball pythons, they are good to breed as soon as they reach 700 grams. For females in the wild, they can breed at 800 grams but generally, 1200 grams is a healthier breed weight. For those in captivity, it is generally best to wait until the female ball python is at a weight of 1500 grams as that will give them plenty of size to care for their young with.

So snake eggs collapse before hatching? Right before a ball python egg hatches it will start to dimple and collapse. This shouldn’t be an issue so long as you can feel the movement of the little snakes inside. Ball pythons don’t have hard beaks like chicks to break open their eggs. They instead have an egg tooth so the shells need to fall apart a little so that they can get out.

Flick loves learning and sharing knowledge about snakes and other unique pets. He has worked with Embora Pets as a contributing writer since 2018.

Not long ago, we welcomed our fur baby Lexie into the fold of our family.  After our dog Buddy's passing, we eventually decided to welcome another dog into our home and hearts.  We have had...