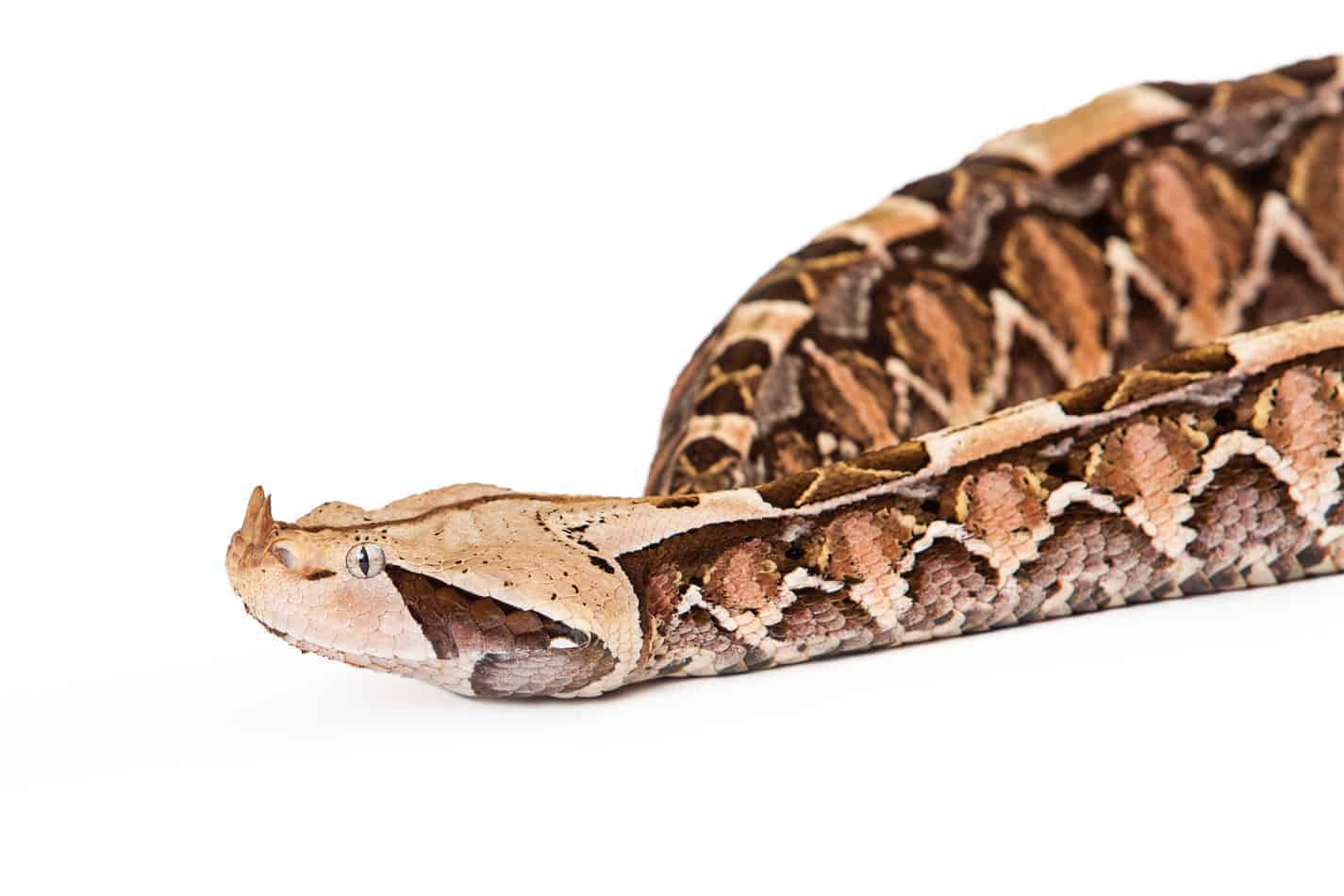 You might have heard the term Gaboon before. Some associate it with a soft, red African wood used as plywood or to make furniture. Maybe you think it sounds like an obscure and poorly concocted insult. But did you know it’s also the name of the largest snake in all of Africa?

So what is the Gaboon viper? Scientifically named the Bitis gabonica, the Gaboon viper is the largest snake on the African continent. The Gaboon is notorious for its intricately patterned scales, its deceptively unaggressive behavior, and its deadly bite.

Turns out, they are actually a pretty cool snake, and you’re about to learn everything there is to know about it.

An average of five to seven inches long at birth, males can grow to lengths of three to four feet. In their prime (about five years of age), females far exceed their counterparts in terms of size, sometimes reaching massive spans of six or seven feet. Gaboon vipers can weigh as many as eighteen pounds.

There’s a common misconception that all snakes lay eggs. They are reptiles, after all, and reptiles always hatch from eggs. In the instances of some select lizards and snakes, however, these eggs actually develop and hatch within the mother’s body, and she ultimately gives birth to live young. Such is the case with Gaboon vipers.

Gaboon mothers can have as many as sixty babies every two to three years. These babies immediately leave the nest and start life on their own.

In the wild, Gaboon vipers usually live at low altitudes, hiding out in rainforests, thickets, and woodlands amidst dense vegetation and heavy humidity. They can occasionally be found in swamps or rivers (they love to swim).

Because Africa is so diverse in landscape, some Gaboons have adjusted to life on cashew plantations and in the grasslands surrounding forests, but rarely do they ever venture near towns or other residential areas. They prefer solitude.

Gaboon vipers are sometimes confused with their close relatives, Bitis arietans (more commonly known as African puff adders). As a rule of thumb, if the snake is found in open country, it’s not a Gaboon. Gaboons thrive in thick, wet habitats. Puff adders are more accustomed to dry heat and exposure to the sun.

They are nocturnal creatures, Gaboons prefer the dark. They tend to take cover under bushes and rocks. Really, any covert hideaway near the ground will do. These snakes will typically emerge from their den around sunset in search of prey.

They hunt for rodents and other small mammals, ground-living or feeding birds, toads, and frogs. There are some accounts of Gaboons vipers ingesting porcupines, large rats, and even fully-grown elk, but these are rare occasions. Gaboons’ eating habits are relatively uniform.

Similarly to most snakes, Gaboons have poor eyesight and rely on vibrations and chemical signals to detect movement. Rather than actively stalking their prey, these snakes camouflage themselves in leaf litter and ambush when the target draws near.

Unlike other species, however, these snakes don’t “bite and release.” Because the effects of their venom are slow, Gaboons keep prey in their jaws until it dies. When the animal stops moving, the Gaboon will start to eat.

Gaboon vipers are not yet listed on the IUCN Red List of Threatened Species, but they might be considered endangered very soon. Young Gaboons can be overpowered by large birds and wild cats, but mature Gaboons have very few predators. The primary threats to Gaboons as a species are humans that kill out of fear or for meat.

How Venomous are Gaboon Vipers?

In a word? Extremely.

Gaboon bites are always considered serious medical emergencies. Even a bite from an average-sized snake is potentially fatal. If the antidote is not administered immediately after a bite, the victim could die, or at least lost the affected appendage. If you own a pet Gaboon, it’s wise to keep plenty of antivenin (antivenom) on hand. It can be very difficult to treat a Gaboon viper bite in time.

The issue with Gaboon bites isn’t really the poison itself. Small doses of Gaboon cytotoxins have been applied to mice and other rodents, and the results are rarely fatal. But the glands behind a Gaboons’ enormous fangs (which can grow up to two inches long) hold vast amounts of venom. In fact, Gaboon vipers’ bites produce the largest quantities of venom of any snake species in existence.

Milking a Gaboon for antivenin can yield two grams of dried venom. These snakes can inject up to nine milliliters of venom into a victims’ bloodstream with a single strike. Only thirty-five milligrams are required to kill a 150-pound human being—that’s about one-thirtieth of the average Gaboon’s venom release. A single adult Gaboon viper is thought to hold enough venom to kill thirty full-grown men.

The big problem with owning venomous snakes is how ill-equipped we are to treat them. Snake expert Brett E. Nelson expounds on this concern in his article, “Venomous Reptiles and the Law.”

“Under the best of circumstances, medical treatment for snakebite is expensive, pain can be severe and permanent injury and death real possibilities. Most emergency room doctors are not experienced in treating snakebite and, in most places, it would be unreasonable to expect them to be versed in the treatment of this rare injury.”

Don’t worry: Your chances of being bitten by a Gaboon viper are extremely slim. These are sluggish snakes, often reluctant to move at all. They sometimes lash out when directly stepped on, but even then, a bite is not guaranteed.

Still, it’s probably unwise to let your guard down around a Gaboon. If you’re not trained to handle them, you should avoid venomous snakes altogether. If one does decide to bite, you could be in some real trouble.

Can I Own a Gaboon Viper?

Depending on your location and with the right permits, you probably can. You can always contact your local zoo to find out whether it’s legal in your area to own venomous snakes and, if it is, what paperwork is required.

Obtaining and transporting unlicensed or illicit reptiles across state lines is a federal crime. You’ll want to comprehensively review your local rules and regulations regarding the ownership of venomous snakes, so as not to accidentally get involved in a national reptilian crime ring.

If you don’t live in the United States, the best I can do is tell you to consult animal experts in your area. Some countries have extremely strict regulations regarding the possession of venomous reptiles, and the repercussions for unlawfully purchasing and owning one can be severe, so you’ll want to be absolutely certain that it’s legal to own a Gaboon viper in your area before you head out to buy one.

I can’t express how crucial it is to do your research before acquiring any potentially dangerous pet. Without the proper training and understanding of its habits, living conditions, dietary needs, and other preferences, you could be putting yourself in serious harm’s way by purchasing a venomous snake.

Furthermore, as undomesticated animals require special attention, you need to know just how to care for your snake so it isn’t unintentionally malnourished, neglected, or injured in some other way.

Our aforementioned reference, Brett E. Nelson, has a few things to say about the possible upshot of owning a venomous snake.

He said that venomous snakes by nature are able to hurt you. You will need insurance and if you do not have that then you should not have a venomous snake. The cost of treatments for snake bites can cost upwards of $7,500. This is not something to be taken lightly.

“By their nature, venomous reptiles always have the potential to inflict harm.”

Nelson goes into detail of his experience being bitten. Since antivenom is time-consuming to create and it’s not in high demand, it is expensive. He chose not to use antivenom because it would have possibly tripled his medical bill. (Again, you can read the article in full here.)

Not only can a poisonous pet be dangerous and possibly illegal, but its expenses can extend far beyond initial purchasing and food costs. In short, you need to be fully prepared before purchasing a Gaboon viper—or any wild animal, for that matter. Owning a venomous snake might be fun, sure, but safety should always come first.

Where can I buy a Gaboon viper? The Kingsnake Classifieds

are a great resource for anyone looking to buy or sell venomous snakes. If you can’t find a Gaboon viper here, there are plenty of other online resources. Be sure to check whatever site you use for proper legal certification. It’s not likely that anyone in your neighborhood is selling a Gaboon viper, but you can always ask around.

How can I properly care for a Gaboon viper? Gaboon vipers can live in any tank meant for an approximately six-foot reptile. The enclosure should include a “soaking bowl” for the snake, filled with room-temperature water, and its floor should be covered in soil. The reptile house should be extremely humid. Gaboon vipers should be fed once or twice a week. Read more about Gaboon viper care here